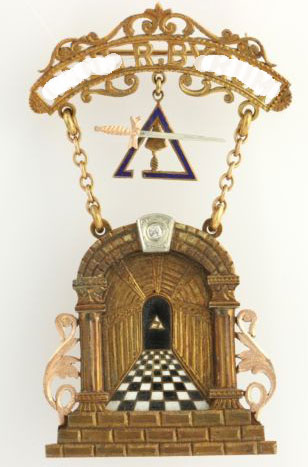 To Royal and Select Masters are given the keystone in Masonry, more precious than is known by the vast workers of the quarries; and it has been truthfully proclaimed that to preserve and transmit our principles to those who succeed us, in the hour of low twelve, is a sacred, bounden duty we owe to Cryptic Masonry. Thus believing, we should often revert to the origin of our Institution, for as has been said, it is only by digging to the foundation and examining each stone minutely that we can rightfully estimate what has been erected thereon. It is so with Freemasonry.

The first Grand Council which assembled at Jerusalem was composed of Solomon, King of Israel; Hiram, King of Tyre, and Hiram Abiff – the three Grand Masters, who, unobserved by “prying eyes,” devised the entire plan by which the temple should be erected, how the workmen should be divided into various degrees, each class consisting of an independent body, whereby it might be recognized by the peculiar sign of that degree. Most happily, too, they combine within the power of the council the alpha and the omega of Freemasonry, thereby denominating Cryptic Masonry, by way of pre-eminence, the summit and perfection of Ancient Craft Masonry. Thus, in fact, the duties, the powers, the responsibilities of a council embrace the whole range of Ancient Craft Masonry, from the conception of the idea in the heart until the candidate is in the full possession of our mysteries, or in our own peculiar language, until he has passed the circle of perfection. It is in the secret vault, securely guarded, that the illustrious companions are required not only to search out the truth but to determine plans and design objects for the private as well as general good of the Craft.

If, therefore, companions who constitute this class and who have passed the circle of perfection – who have witnessed the wisdom, strength and beauty of our principles, would be but true to their obligations and faithful to their requirements, what immense good could be accomplished. No bickerings, no strife and no conflicts could ever exist in the Masonic institution, but peace, concord and tranquility would prevail, and the only contention in the whole Masonic family of earth would be who can best work and who can best agree. Brotherly love and charity would be happily blended together, and the life and character of a gentleman, of a faithful brother and devoted companion, would be merged m the life and purity of a consistent Mason. With you and all illustrious companions who have entered the secret vault rests the responsibility of confusion ever prevailing in the lodge, chapter or council. Hence you perceive that the charge of a Select Master is literally true when it says to each of, you “that your obligations are increased in proportion to your privileges; and also let it be your constant care to prove yourself worthy of the confidence reposed in you and of the high honor conferred on, you in admitting you among Select Masters.”

The degrees of Entered Apprentice, Fellow Craft, and Master Mason were originally Ancient Craft Masonry; while the old constitutions gave the Master the right and authority to congregate his members into a chapter for the purpose of conferring the Royal Arch, which originally constituted a part of the Third degree. In elucidating the Royal Arch it becomes necessary that other degrees should be incorporated into the chapter for the purpose of explaining the various parts of the temple. Hence the Mark and Most Excellent Master’s degrees were added and conferred before the Royal Arch.

In process of time it became necessary to establish a Council whose province it should be to “account for the concealment and preservation of those essentials of the Craft which were brought to light at the erection of the second temple, and which lay concealed from the mystic eye four hundred and seventy years.” Hence Cryptic Masonry was inaugurated.

In different countries different systems prevail to inculcate, enforce and teach Ancient Craft Masonry; but in this country it is confined to the degrees of the lodge, chapter and council. Cryptic Masonry, therefore, is contained within the degrees of Royal and Select Masters, and are numbered eight and nine in the York rite, although in a chronological point of view they are the first and last degrees, hence called the alpha and omega of Ancient Craft Masonry. They illustrate the mysteries of Masonry, and without a full, perfect and complete knowledge of these degrees our Masonic edifice is incomplete and unfinished; or, as has been aptly said, “the degrees of Royal and Select Masters are polished and perfect ashlars, marked and numbered for the building.”

Delos, an island of the Cyclades, was famed in ancient times for the number and skill of its artists, and for the splendid temple and oracle of Apollo, raised eventually as an asylum to his mother when she was pursued from place to place by the implacable Juno. From this famous oracle came the fount of inspiration, said to be a chasm from which issued the exhilarating vapor. Over this was built the tripod of the gods from which a populace could breathe the ascending distillations. To the inbred Mason we need riot enlarge this illustration. The soul grows as truly as the Mason grows – as the tree takes in the air of the universe, aided by dew and rain, and by its mysterious chemistry transmits sap and fiber into wood and leaf, and flower and fruit, and color and perfume, so does the soul of the Mason drink in living knowledge and by a divine alchemy, as patent and with the same inherent force as that which lies hid in the germ of the acorn. The virtuous Roman truly said, “Either let not that which seems expedient be base, or if it be base, let it not be expedient.”

If our Masonic Order were merely a thing of yesterday; if it were local and confined to one country, or to men of one faith; or if the number of its initiates were limited to this or that clime, or its capacity for good or evil devoted to selfish ends, the question of its morality and philosophy might well be consigned to one grave. Not in vain are the winged seeds of truth ever sown. GOD sees that they take root somewhere and grow. The truth of all this is witnessed in the past history of nearly 6,000 years – their pungent facts have been figured on the breast-plate of time. When our ancient brethren dispensed their charities under the frowns of barbarism – when they disregarded the anathemas of kings and rulers and gathered around common altars in fraternal relations – they gave divine evidence that the Order would survive the mutations of time; and if we, brothers, shall continue to emulate the virtues of these good and faithful men, it will survive the wreck of ages yet to come.

Need I say more in honor of that Craft whose acts shine among the brightest in the domain of “good will to man?” Deeds of love, it may well be claimed, are the chief employment of the angels of GOD, and into a soul that overflows with bounty the bright-robed messengers of faith, hope and charity constantly descend. Our faith after death shall be swallowed up in victory; our hope consumed only by its enjoyment, and our charity ended when we shake off mortality in the boundless atmosphere of eternal love.

This article republished with permission from The Masonic Trowel, Masonic Quotes by Brothers