In May and June, the Technology Committee worked with leadership to put out a survey on GGCCMI Objectives and Improvements. The survey was short but was designed to provide the opportunity to open a channel of communication, and two of the questions were short answer. We used the Weekly Decryption email list and Facebook as our main advertisements to get participation, but only had 125 responses. We hope that we will see a continued growth in participation in future efforts. Following are the results:

Question 1: How are you getting updates from the General Grand Council? (Multiple answer multiple choice).  Answered by 124 of 125 respondents.

For future updates, please use the following links to keep up with GGC activities:

Question 2: What are your favorite initiatives of the General Grand Council? (Multiple answer multiple choice). Answered by 116 of 125 respondents. 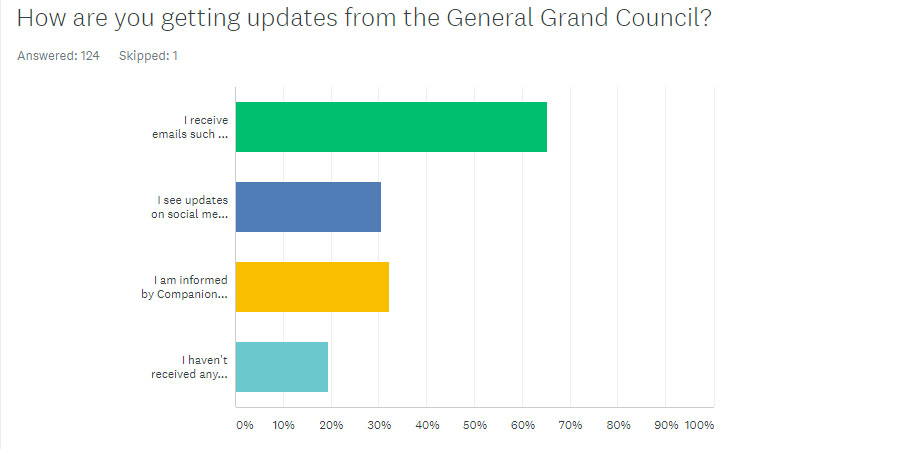 Please see the General Grand Master’s Cryptic New Year article for updates on these and more programs. The Technology Committee is currently working on the “inner workings” of the website, we have just acquired new talent and a plan for the newsletter, and the online learning system is planned to be fully functional by the end of the year (or sooner).

Question 3: What initiatives or programs would you like to see? (Short answer). Answered by 82 of the 125 respondents. Of the 82, eight provided no or ambiguous answers, and four provided two each, leaving 78 contributions. The following is a synopsis:

Many of these are being addressed as outlined by the General Grand Master, but what is important is to keep the conversation going through your Ambassador and Regional Deputy.

Question 4: Please share your most effective fundraiser for CMMRF. (Short answer). Answered by 79 of the 125 respondents. Of the 79, 18 were questions in return or not a suggestion, leaving 61. The following is an overview:

For more information on CMMRF, please visit the following websites:

Question 5: Would you like to see demonstrations of a portion of the Royal Master degree available for Master Masons? (Yes/No/Comment). Answered by 122 of 125 respondents. 70 responses were “Yes”, 38 were “No”.

Within the comments, four were Positive citing the benefit of a better system of expounding esoterica, one is already doing it, one said to keep it very brief, and one said it would be much like MMM for Chapter. Five were negative, stating that we should not have it be “free”, one stated that the MMM isn’t working, one said MMM is enough, one wanted further definition, and one said it should stay in York Rite. Five were neutral because of not enough information, they were unsure, they wanted further explanation, the link to York Rite is ignored, and one had never heard of the Royal Master.

We hope the above information is useful and shows the varying perspective of our path forward. We encourage everyone to share ideas and help us to keep the communication lines open and active for the betterment of Cryptic Masonry.