After He made the form of the chariot of the supernal Adam – GGC Education Comm. 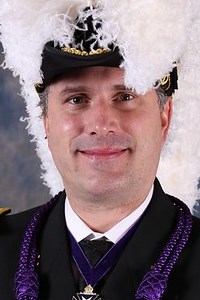 “After He made the form of the chariot of the supernal Adam, He came down upon it and was then named by that form and called El Elhoim. And if the Craftsman were to break those vessels that He had made, the water would return to its source….And afterward He made a great vessel, and through this He called Himself “the Understanding One.”
Zohar – The Faithful Shepherd, as cited in The Tree of Life, the Palace of Adam Kadmon, by Chayyim Vital

There is a common and prevalent misconception regarding the Sephiroth in the modern age.

It is commonly presumed that the shape of the Tree of Life (Etz Chayyim), as popularized and transmitted in the form of the three pillars, comprises the Kabbalistic doctrine pictorially.

This is incorrect – the form of the Tree, as communicated by Rabbi Isaac Luria (the Arizal) to his disciples is far more nuanced and opaque than this simplified rendering.

The Tree of Life in its “form of a man” is an image of the Ruach of Adam Kadmon, the form of the “middle soul” of the primordial man which filled the universe of creation. “The spirit of man is the lamp of the Lord” (Prov. 20:27). As such, the Sephiroth are first described as the “linear Sephiroth”, which essentially inform the “circular Sephiroth” comprising the vessels and their inner and surrounding lights to fill out and extend the “world of points”. This is a complex form not properly understood, one well beyond the scope of this brief discussion here, but it is one to which the attention of the curious student is readily commended.

Of course, even while it attempts to discuss a prevalent unity, there can be no single kabbalah. When attempting to relay that which exceeds a capacity of words to relate, the form of an expression necessarily adapts to illustrate and accommodate a particular concept set before us. However, there remain internal consistencies which must be upheld to reveal beyond the individual concepts and adaptations themselves the overarching Unity with which we are concerned, and these consistencies are most useful where they are preserved congruently. A departure from the symbolism in one capacity, then, necessarily requires yet more departures to substantiate the change, and a new kabbalah must ultimately emerge. Such a new kabbalah, then, is not really kabbalah at all, but something else syncretizing and appropriating for its own purposes. It is, therefore, advisable to be discriminating. The well is deep, but be careful when drinking from another man’s bucket. The purity of the water may readily be tinged.

So it is that when we look at the modern Tree of Life, popularized in the New Age movements and many so-called Western Mysteries (even those of our beloved Craft), we frequently see three paths constructed between Malkuth (see Figure 1). These paths are used to position the so-called sinister and dexter paths, to the left and right side of the Tree respectively, and thereby balance the Middle Pillar between Severity and Mercy, between (at least in reductionist writings) concepts of good and evil.

This is a convenience for some, however it seems to overlook the importance of Yesod, that sphere of Formation, (called in our Royal Arch ritual the cubical stone of foundation) upon which the world was wrought.

Malchuth is the intermixing of all things, like the utterance of new words emerging from a combination of particular letters. Thus, in this world of action (Assiah) the entire Tree is represented, intermixed and combined into all things for the infinitude of expression. All things coalesce in the density of the Kingdom. The sinister path and the dexter path are therefore designations made in Malchuth – there is no need of ascending to the left or the right. Such a duality is inconsonant with the forces of manifestation the Tree balances: “Blessed is the man that walketh not in the counsel of the ungodly, nor standeth in the way of sinners, nor sitteth in the seat of the scornful. But his delight is in the law of the LORD; and in his law doth he mediate day and night. And he shall be like a tree planted by the rivers of water, that bringeth forth his fruit in his season; his leaf also shall not wither; and whatsoever he doeth shall prosper.” Psalm 1. (The rivers are alike the paths. The Tree planted thereby, and nourished and sustained by them, is alike that which grows up from Malchut. The day and the night can be said to be the left and right, the internal and the external and the course of duality.)

Only through Yesod can the higher manifestations be made known. In earlier representations of the three-pillared Tree, there is one path to Yesod – and it is often denominated by the letter Tav (see Figure 2). 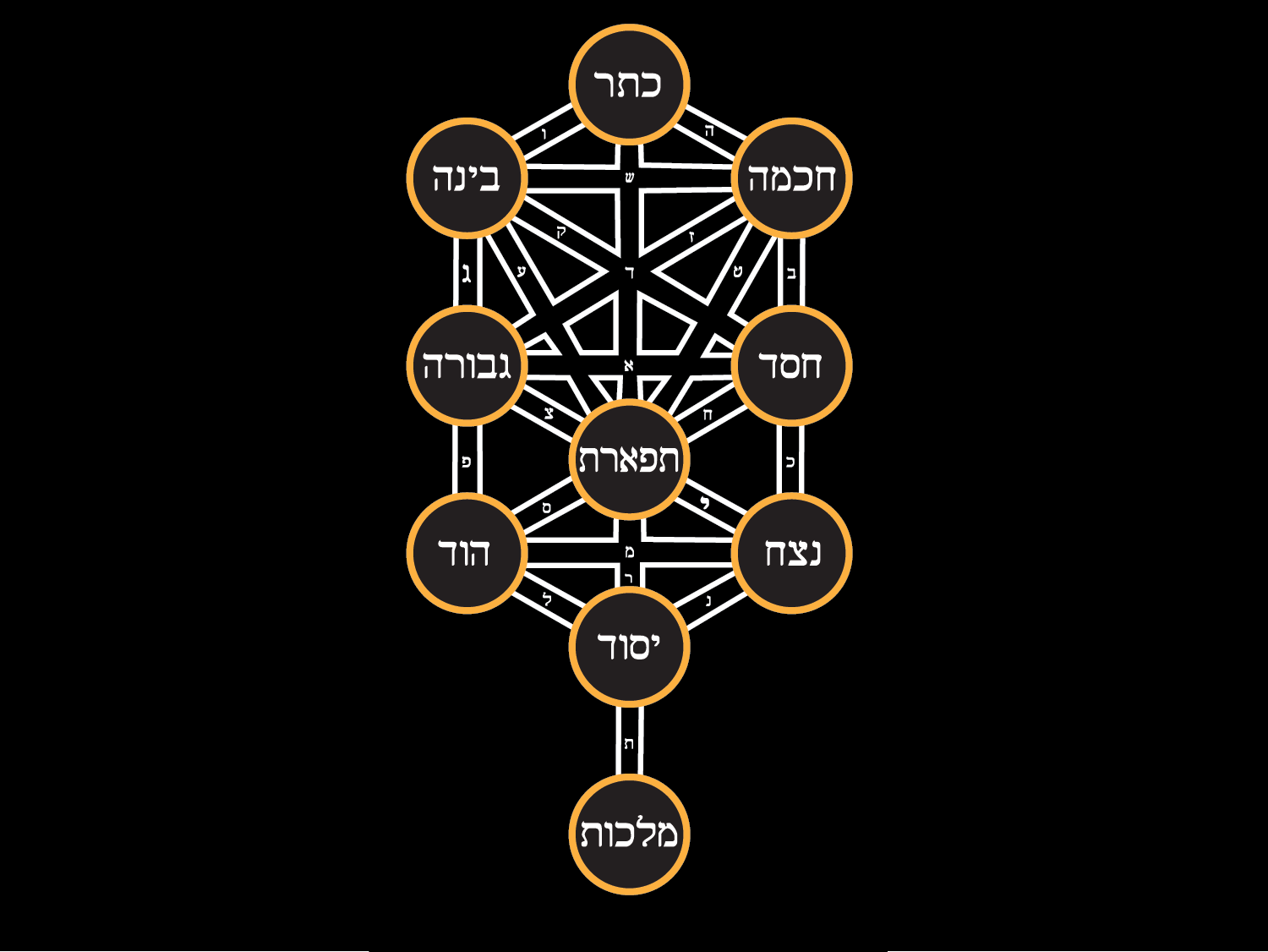 This is significant because, in Ashkenazi pronunciation and likely in earlier times, the Tav adopts the double-body diacritic, represented by the dagesh, the vowel point that renders a plosive “t” sound versus the aspirant “s”. (In earlier pronunciations the “s” sounded version (the Tav absent the dagesh) was silent – a voiceless dental fricative. This is significant indeed.)

However, also significantly, the Tav receives no final form like the double letters Pe and Kaph. It’s numbering of 400 is the highest value absent that dual characteristic implied by the final form of other letters. Thus the Tav is a single expression of a dual characteristic that terminates the letters of manifestation. In other words, the Tav conceals within it the dual paths alluded to were Malchut to reach to Hod and Netzach in addition to Yesod.

But Tav is the confines of the Kingdom.

Thus Tav is the reach of totality. Beyond its reaches all things are contained in the action of time. It is the final letter of Malchut. It is the final letter of the Hebrew word emet, meaning truth. Thus via this path from which the Kingdom entirely depends, the sphere of Formation is determinable, from whence the Tree becomes accessible as we enter the higher worlds of Yetzirah. Tavis like the trunk from which the Tree is brought up from the root-giving depths to the sustenance of the light. It can be said, for Christians, to be significant of the Cross itself.

The truth of the Tav is perhaps signified in Ezekiel’s vision (Ezekiel 9:4) wherein the letter Tav is said to be the mark by which the righteous in Jerusalem were represented.

It is, therefore, not surprising that the earlier renditions of the linear Sephiroth were illustrated with this single path between Malchut and Yesod. Further, the two paths when shown fallen to Malchut in the New Age Tree are probably better represented as opening between Din “Judgment” (or Geburah, “might”) and Chockmah, “Wisdom”, and between Chesed, “Mercy” and Binah, “Understanding”. This connects the sides of the Tree across the hidden door (the letter Daleth) at the juncture of the “garden” where Da’ath may be found to appear. Three paths, then, of Qoph, Zayn, and Daleth, cross to render a hidden cube perhaps, reflected through Tifaret and reminiscent in the lights of Yesod. This is akin to the mystery of Arik Aipin (the Macroprosipus) made manifest within Zeir Ainpin (Microprosipus).

It is not correct, therefore, to assume that the paths are travelable per se, and that they exist as literal roads to set foot upon. The paths are better contemplated as nourishing rivers that enable the inner light of the vessels to communicate and interrelate. Thus it is worthwhile to contemplate the relational baring Tifaret provides in sustaining the differentiation of Yesod from the other Sephira, from which Malchut therefore depends. This symbolism is entirely lost in the New Age representation which, in all probability, should be considered a syncretism and an appropriation of material reordered for purposes perhaps inconsistent with the intention of the Ones of Blessed Memory.