An Examination of Prayer Beads from a World Religions Perspective 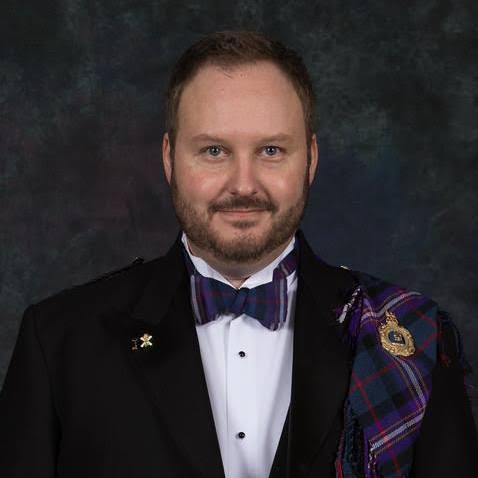 One of the greatest benefits of discussing man’s spiritual pursuits with a fellow Brother of the Craft, is that he is sure to agree with you that we are spiritual beings, who are dutifully bound to the adoration of a universal Creator; G-d, HaShem, Jehovah, Yahweh, Allah, Shiva, etc., all offering a piece of the puzzle to that greater mystery that is set before us to discover within ourselves. As Masons, we honor and respect the variance found in how adoration is manifested among mankind, or should we so aspire.

I have always been fascinated by the World’s religions and their rituals. When I was 13 years old, I attended an all-boy’s Catholic parochial boarding school founded by the Norbertine Order who made it their mission to cultivate the minds of young men at an early age through a rigorous and competitive curriculum of academic, religious, and moral disciplines. By 18, I had become familiar with the Sacred Literature, Catechism of the Church, writings of great poets and saints, and a basic knowledge of Church Latin and ritual. I was most drawn to the ritual of the Church, particularly certain methods of prayer. The Abby served two-fold; as a seminary for the vocation of priesthood, and a private high school. In this respect, seminarians, fraters, priests, and students alike participated in all church ceremonies. Perhaps it was my altar-boy experience, which first ignited my passion for ritual… the passion I still carry in my endeavors within our beloved Craft. Close your eyes and imagine a beautifully structured church adorned with stain glass windows, amidst rose-gardens and pathways, tucked away deep in the mountains. 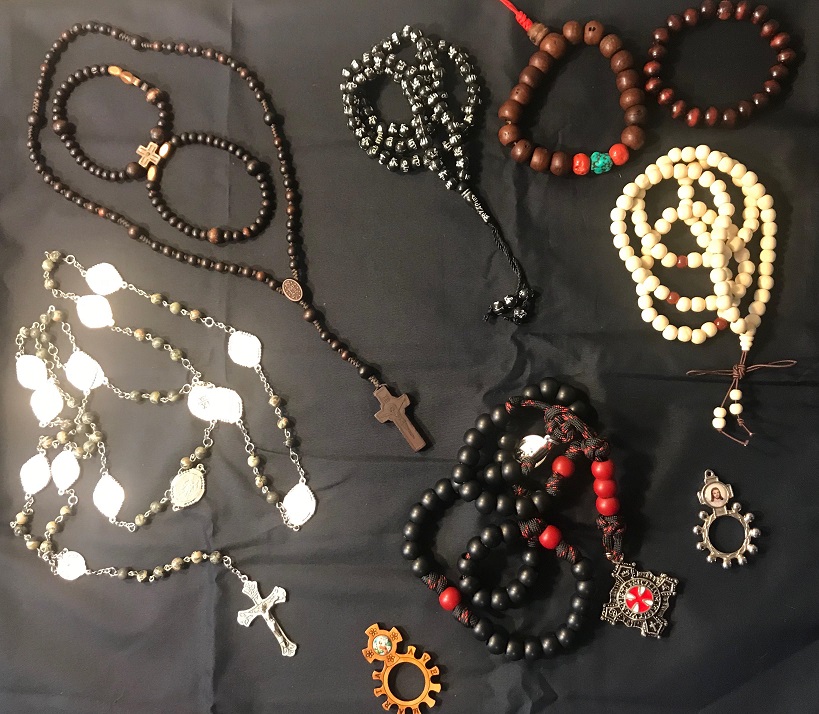 Imagine the priests wearing robes and sandals, ceremonies spoken in Latin, songs sung in Gregorian chant by the choir of fraters, the fragrance of burning incense… it was truly an enchanting experience. Most of the “Rituals or Ceremonies” revolved around participation in the sacraments, mass/liturgy, benediction, and vespers, but my favorite was praying the Rosary. There is something very soothing about praying with others in unison and facilitating tools or instruments to do so. One could easily see the value it brings as a form of guided meditation (although in praying the Rosary, it is interactive in that the leader says a prayer or a piece of a prayer, and the congregation follows with a response).

There is a multitude of topics I could expound on regarding Masonry, the Catholic Church, and Buddhism, and the personal revelations I have experienced as a member of those institutions, however, I have chosen to focus my discussion on the examination of prayer beads from a world religions perspective. Not limited to one faith, I will be discussing Catholicism’s Rosary and Chaplets, Muslim’s Misbahah, and Hindu’s,Buddhist’s, and Sikhism’s Japa Malas.

Now keep in mind that since these faiths vary in their beliefs, the prayers used in conjunction with the prayer beads naturally differ but the idea is relatively the same; Man makes use of a physical tool to count the repetitions of prayers, chants, or devotions (either mentally or orally) creating a meditative state of mental focus and spiritual awareness, and using that frame of mind to alter or heighten the experience of communing with deity.

Prayer beads from any of these religions will vary in color, shape and size, and can usually be found made of wood, hematite, pearl, crystal, or glass. In the Catholic Church, there are 2 forms of prayer beads; Rosaries and Chaplets. To the non-member, these two can become easily confused, but simply put, you can remember the difference by knowing to whom the prayers are being directed in adoration.

The Rosary is a devotion to the Blessed Virgin Mary and focuses on the Mysteries of Jesus Christ, whereas chaplets typically involve saints (i.e. St. Michael’s Chaplet). Typically, rosaries and chaplets differ in the number of beads affixed to the rope or chain and in the prayers recited during their use. I do need to give mention, however, that rosaries can come in different forms, which due to their intrinsic shapes, alter the number of beads. For example, a typical rosary will have 5 sets of 10 beads or decades, separated by a larger bead in between each decade. Each rosary will have a crucifix attached at the bottom and a middle line consisting of 5 beads (in a series of 1-3-1) leading to the loop.

Whereas other forms of rosaries (i.e. wrist rosaries and thumb rosaries) may only have 10 beads or bumps total.

www.CatholicCompany.com (“Information about the Rosary,” n.d.) provides an excellent and succinct description on the evolution of the Rosary:

The Rosary (The Pauper’s Psalter)

This popular devotion of Roman Catholic tradition has its origins in medieval times (around the 12th and 13th centuries). Many people of this age could not afford to purchase the Psalter (a book containing the 150 psalms) which were used by the religious orders and clergy. In order to supply the great number of faithful with some prayer form which would be easily accessible, itinerant preachers developed and encouraged the use of a string with beads upon it. Each bead would represent a prayer to be said – the Lord’s Prayer, the Hail Mary, and the Doxology. In time, other prayers would be added to make up what we now call the Rosary.

Originally, the rosary was called “The Psalter of Jesus and Mary” because it consists of the prayer Jesus gave us (The Our Father) and the prayer the Angel Gabriel gave us (The Hail Mary). The word Psalter, as mentioned above, refers to the Book of Psalms in the Bible, which has 150 psalms. When prayed completely, the original rosary (Joyful, Sorrowful, and Glorious Mysteries) has 150 “Hail Mary” prayers. The word “Rosary” comes from the Latin word rosarium, which means a garland or bouquet of roses. Each of the prayers of the rosary is an offering of a rose to Jesus through Mary.

The use of beads or knots when praying dates back to the early days of Christianity. String or heavy cord was tied with knots and used to help focus and keep track of the prayers. The word “bead” comes from biddan – an Old English word which means “to entreat” or “to pray”.

Islam (Sufism), Sikhism, Hinduism, and Buddhism all share a similar expression of devotion when using prayer beads, namely what is referred to as a Mantra or Tasbih. According to Merriam-Webster, a Mantra is “a sound, word, or phrase that is repeated by someone who is praying or meditating.” Similarly a Tasbih is “a form of dhikr that involves the repetitive utterances of short sentences glorifying Allah, in Islam.” You may be familiar with the Hindu or Buddhist repetition of the word or sound of “AUM.”

In Islam, particularly Sufism, prayer beads are used during Dhikr (remembrance of G-d). Encyclopaedia Britannica (n.d.) offers a great description on this ritual:

Dhikr, (Arabic: “reminding oneself,” or “mention”), is a ritual prayer or litany practiced by Muslim mystics (Ṣūfīs) for the purpose of glorifying God and achieving spiritual perfection. Based on the Qurʾānic injunctions “Remind thyself [udhkur] of thy Lord when thou forgettest” (18:24) and “O ye who believe!

Remember [udhkurū] Allāh with much remembrance” (33:41), the dhikr is essentially a “remembering” of God by the frequent repetition of his names. Originally a simple recitation of the Qurʾān and various religious writings among ascetics and mystics, the dhikr gradually became a formula (e.g., lā ilāha illa ʾllāh, “there is no god but God”; Allāhu akbar, “God is greatest”; al-ḥamdu līʾllāh, “praise be to God”; astaghfiru ʾllāh, “I ask God’s forgiveness”), repeated aloud or softly, accompanied by prescribed posture and breathing. As the Ṣūfī brotherhoods (ṭarīqahs) were established, each adopted a particular dhikr, to be recited in solitude (e.g., following each of the five obligatory daily prayers) or as a community. The dhikr, like fikr (meditation), is a method the Ṣūfī may use in his striving to achieve oneness with God (“Dhikr,” n.d.).

Muslims use prayer beads called Misbahah, which typically consist of 99 beads, representing the 99 names of Allah. Sometimes there are 33 beads, in which case one cycles through them 3 times to equal 99 (Wikipedia, n.d.).

In Sikhism, Malas are used in performing a similar ritual of remembrance called naam simran. “Simran means to remember, and is a means of contemplative meditation using repetition which enables one to realize that they are an inseparable part of the divine (Khalsa, n.d.).”

Malas used by Muslims, Sufis, Sikhs, Hindus, and Buddhists may generally have 108 beads, and the meanings behind the number 108 varies across faiths.

Take for example a few listed below by author Swami Jnaneshvara Bharati:

Desires: There are said to be 108 earthly desires in mortals.

Delusions: There are said to be 108 human delusions or forms of ignorance.

Heart Chakra: The chakras are the intersections of energy lines, and there are said to be a total of 108 energy lines converging to form the heart chakra. One of them, sushumna leads to the crown chakra, and is said to be the path to Self-realization.

Pranayama: If one is able to be so calm in meditation as to have only 108 breaths in a day, enlightenment will come.

Upanishads: Some say there are 108 Upanishads, texts of the wisdom of the ancient sages.

1, 0, and 8: Some say that 1 stands for God or higher Truth, 0 stands for emptiness or completeness in spiritual practice, and 8 stands for infinity or eternity.

Meditations: Some say there are 108 styles of meditation.

Paths to God: Some suggest that there are 108 paths to God.

Hinduism: 108 is said to refer to the number of Hindu deities. Some say that each of the deities has 108 names.

Islam: The number 108 is used in Islam to refer to God.

Sikh: The Sikh tradition has a mala of 108 knots tied in a string of wool, rather than beads.

Stages of the soul: Said that Atman, the human soul or center goes through 108 stages on the journey.

If one is open to the idea of studying all the world’s religions with the goal of achieving a better understanding of the human condition, man’s innate desire to search out and manifest a relationship with the divine creator, and most importantly comprehending G-d’s Will, they will observe that although there are several differences among these religions (i.e. culture, tradition, language, etc.), there are profound similarities such as ritual and desired intent through fervent prayer. It would be a great disservice, if I were to share with you my interpretation of the common message found in all the world’s religions… the fine line by which I believe is the true message of G-d to his people, for this is a journey you must undergo alone; This becomes your relationship with Deity. Let not our differences divide us, rather our commonalities unite us. For those who believe in a divine creator, one who offers salvation, we must remember that all of us are flawed, imperfect beings, but we are not without repose for G-d is within each of us. And although we are sinners requiring repentance for our transgressions, we may achieve salvation or true Oneness with G-d through atonement.