Cryptic Companions of the World 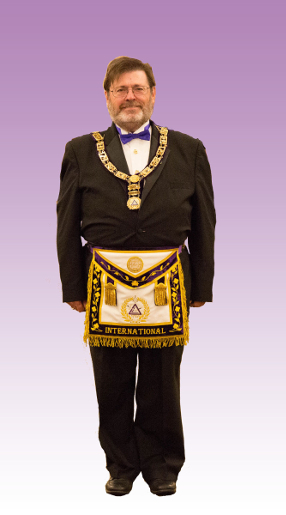 With this issue of the Weekly Decryption, I wanted to briefly report to you about the emerging and increasing role of the Cryptic Rite in all things Masonic. Last week, the General Grand Master and I met with hundreds of Masons of all types from around the Masonic Universe. Our General Grand Master spent his time wisely communicating our 2017-2020 goals with our leadership from various nations and States. Our General Grand Master to the benefit of the entire Craft did much groundwork for the 2020-2023 and 2023-2026 Triennial periods.

This and much more was accomplished at Masonic Week 2018, another in a series of annual conferences under the auspices of the Grand Council of the Allied Masonic Degrees, USA (AMD-USA).

If one has a Cryptic bias, as I do, one can readily see the threads of the origins of Cryptic Rite degrees being interwoven with the teachings and philosophies of the various specialties of the Craft.

One can also discern, if so inclined, some evidence of the possible use of the Select and Royal Master degrees for teaching and instruction of Fellowcraft for the leadership of the Ancient Lodge system of two degrees for the brethren, in a time well before the “Ancients” and “Moderns” purportedly compromised on the creation and conferral of a Master Mason degree for the present day Masonic structure. Obviously, this Cryptic perspective of mine adds to my enjoyment of the many Masonic entities meeting at Masonic Week.

I spent much of my time getting to know the newer officers and rank and file members of the many organizations with which I have become associated with over the past 18 years of attending Masonic Week.

As a member of the Cryptic Rite, I urge you to consider joining the Grand College of Rites USA. A good number of Cryptic Masons were involved in its formation. The GCR is non-invitational and is dedicated to the preservation of what have become “dead” degrees. There is much profit to be found in a study of these degrees and, when known, the motivations of the creators or past adherents of these degrees. See the GCR website at grandcollegeofrites.org

In this issue, I have included an article from a 1998 Newsletter for your consideration. A Companion from North Carolina authored it. I do not know if he ever accomplished much after he wrote this article but he did a fine job in writing it. Oh, wait; he was my nominator for the office of General Grand PCW in Portland. Please don’t hold that against him.

In future issues, we will be discussing long-range planning objectives and strategies as well as the newer membership initiatives of Grand Lodges and Grand Councils, all of which ultimately will be aimed at assisting your Grand Council or local council in identifying and educating the select, faithful and worthy and bringing these men into your Blue or Symbolic Lodge and then into service in the Cryptic Rite. From the known history of Freemasonry in the United States, we know that the future success of all of Freemasonry, preserved with dedication to the essentials of its ancient forms, principles and philosophies, will be led by such men.

Most importantly, all of us in the General Grand Council advancing line truly appreciate your comments in response to these articles. We also appreciate any guidance that any of you can give to your fellow Royal and Select Masters in “signing up” for the delivery of the Weekly Decryption by email. Remember, if a technologically challenged retired government attorney can do it, anyone can do it!