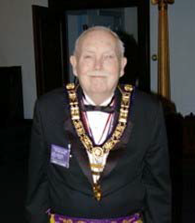 Most Illustrious Companion died on December 30, 2019 in Blackfoot, Idaho. He lived a long life and accomplished many things in Masonry. Below is his bio from when he served as Most Illustrious Grand Master of Idaho in 2010.

Donald S. Thoen was born November 5, 1939 at Amarillo, Texas. He attended public schools there, graduating from Amarillo High School in 1957. He attended New Mexico State University, graduating with a Bachelor’s Degree in Secondary Education in 1965. He was commissioned an Ensign in the US Naval Reserve and served 3 years on active duty on a destroyer in the western Pacific. Upon release from active duty, he moved to Mountain Home, Idaho, teaching instrumental and vocal music at the junior high level, and mathematics, physics, and electronics at the high school level. He retired in 2000 after 31 years of service. He and his wife had two children, Don K., who is a Past Master Councilor of DeMolay and holder of Chevalier, and Janis L., who is a Past Honored Queen and Past Miss Idaho Job’s Daughters.

Don started his Masonic affiliation by joining Amarillo Chapter, Order of DeMolay in 1954. Don received the Chevalier Degree in New Mexico in 1961 while in college. Upon moving to Idaho, he joined the advisory council of Mountain Home Chapter, serving 20 years and receiving the Advisor of the Year in 1975 and the Active Legion of Honor in 1998. He was on the Guardian Council of Job’s Daughters for 10 years and was on the founding Advisory Council and Rainbow Dad for Friendship Assembly Rainbow for Girls in Mountain Home. Don was raised a Master Mason in Elmore Lodge No. 30 A.F. & A.M. in 1971, served as Worshipful Master in 1978 and served more than 27 terms as secretary. He is a member and Past High Priest of Mountain Home Chapter No. 24, RAM. Don is member of Idaho Council #1 Cryptic Masons and Idaho Commandery No 1, Knights Templar. He is also a dual member and Past Illustrious Master of Twin Falls Council No. 7, and a dual member and Past Commander of Twin Falls Commandery No 10 Knights Templar. Sir Knight Don served the Grand Commandery of Idaho as Right Eminent Grand Commander in 2009-2010.

He was conned into joining the York Rite Grand Bodies as Grand Musician in 1996 and tortured the bodies for nine (9) years. He is a member of Emerald Court, Order of Amaranth, served three terms as Royal Patron, and was elected Grand Royal Patron in 2005. He holds active membership in St. Michael’s Conclave, Military Order of the Red Cross of Constantine; Redemption Tabernacle No XL, Holy Royal Arch Knights Templar Priests; Idaho Priory No. 13, Knights of the York Cross of Honour; Order of the High Priesthood, and the Order of the Silver Trowel. Don was awarded the Knight Commander of the Temple by the Grand Encampment Knights Templar, USA. Don has been an active member of the First Congregational Church in Mountain Home for 40 years, and has been the choir director for over 10 years. He enjoys railroad history and is a member of the National Model Railroad Association.