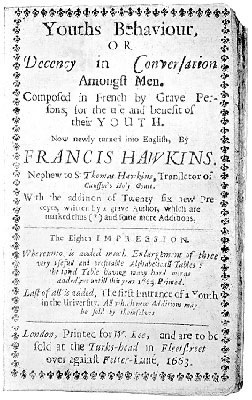 Illustrious Companion Adam L. Hathaway is a Past Grand Master of Masons in New Mexico and Grand Marshal of the Grand Council of Royal and Select Masters of New Mexico.

Good Companions and Brothers All,

The month of February, containing within it the holiday of President’s day and George Washington’s birthday on February 22, provides meaningful opportunities to reflect upon Brother George’s legendary courteous demeanor and gentlemanly conduct.

In the last issue of the Decryption, George Washington’s Rules of Civility & Decent Behaviour in Company and Conversation was introduced as the 110 social maxims that a young Washington began copying, about 1744, as an exercise repeated over the years in order to improve his penmanship. The article also addressed that the origin of this document can be traced back to the Jesuit work Bienséance de la Conversation Entre les Hommes circa 1595 which was translated into the English Youths Behaviour or Decency in Conversation Amongst Men by 1641.

The Rules of Civility, as penned so many times by Washington, may be viewed as having three major themes: mastery of one’s self, courteous interactions with others, and reverence to God. This article will highlight some of the rules to inspire the reader to obtain his own copy and delve enthusiastically into the subject. (note that capitalization, spelling and grammar are transcribed exactly printed in the Mount Vernon edition).

1. Every Action done in Company, ought to be with Some Sign of Respect, to those that are Present.

This first rule, asserting that respect govern every human interaction, provides the landscape for all the rules, just as the introduction of the Four Cardinal Virtues of Freemasonry: Temperance, Fortitude, Prudence and Justice, presented early in the ritual, provides the basis for all brotherly love and harmonious association. Masonry, being a virtue-driven fraternity, also espouses the virtue of Respectfulness as it does all virtuous study.

8. At Play and at Fire its Good manners to Give Place to the last Commer, and affect not to Speak Louder than Ordinary.

A gentlemen may be defined as someone who goes out of his way to make the people around him more comfortable. This rules reminds us to always make room for others, even at the expense of our own comfort. By combining the concepts of giving up one’s place (at table, cook fire, or social engagement) with not speaking over-loudly, this rule admonishes us to not seek comfort or attention in competition with another’s right to the same and to be generous in doing so.

9. Spit not in the Fire, nor Stoop low before it neither Put your Hands into the Flames to warm them, nor Set your Feet upon the Fire especially if there be meat before it.

Common rooms in taverns, inns, monasteries, etc. often cooked food for groups of people using only one fire. Cleanliness was a major concern due to disease, rigorous travel, and deplorable hygiene issues. Coming indoors and potentially contaminating the communal meal could have dire consequences.

15. Keep your Nails clean and Short, also your Hands and Teeth Clean yet without Shewing any great Concern for them.

We see here another reference to cleanliness, as there are many in the rules, with the message to be clean and that the regime should be a private affair.

17. Be no Flatterer, neither Play with any that delights not to be Play’d Withal.

This rule is stating, in as civil and sanitized terms as possible, do not toy with another’s emotions and do not attempt to consort with someone who does not wish it. Remember that flattery is not considered to be complementary, but rather, insincerity used to attain specific objectives not of a gentlemanly nature.

28. If any one come to Speak to you while you are are Sitting Stand up tho he be your Inferiour, and when you Present Seats let it be to every one according to his Degree.

With regard to the first part, do not sit when speaking to someone who is standing, regardless of rank or position. For the second part, take care in the seating of others and follow appropriate protocols when doing so. Masonically speaking, be sure that each is given his due position and proper introductions.

108. When you Speak of God or his Atributes, let it be Seriously & [with] Reverence. Honour & Obey your Natural Parents altho they be Poor.

It is important to highlight that obeying one’s parents is mentioned in tandem with the same rule as honoring and revering God. Also note that the word “poor” is not a reference to wealth. It refers to poorness of parenting. Therefore, even if parents make mistakes, they are still worthy of respect.

109. Let your Recreations be Manfull not Sinfull.

Too often, “being a man” is confused with selfishness, bullying and instant gratification. Not only does the original manuscript, written in the late 1500s, seek to separate “manliness” from “sinfulness” so too does Freemasonry. We can trace the Four Cardinal Virtues of Temperance, Fortitude, Prudence and Justice to the Greek Stoic philosophy founded in the early third century BC. The Stoics believed that life is to be enjoyed and to be truly happy, man must keep his passions within the bounds of these virtues (Sound familiar?). Therefore, the war to be a man and not an animal, has been waging for thousands of years, to say the least.

110. Labour to keep alive in your Breast that Little Spark of Ce[les]tial fire Called Conscience.

This rule recognizes that our consciences, the voice of our souls, are of a celestial, or heavenly origin and that we must work to keep morality alive within ourselves.

An exploration of the life of Brother George Washington reveals that he did not merely copy these 110 directives, but rather, lived them to fullest. He truly believed in these last three maxims as well, knowing that God is present and active in every aspect of our lives, often referring in his letters and speeches to divine providence being supreme in his successes and in the creation of our country. Some authors assert that because Washington was a Deist, it was odd that he diverted from the Deist philosophy that God created the world and then left humanity to fend for itself. Nothing could be farther from the truth as not all Deists believed in the disengaged absence of God. But rather, Washington was firm in his believe of an active, engaged and accessible deity.

So may we, all of us, be so resolute in our convictions, in our faith and in our desire to live virtuous and courteous lives. Let us close with this quote from our Brother, George Washington and give life to his words every day.

“You are now extending into that stage of life when good or bad habits are formed. When the mind shall be turned to things useful and praiseworthy or to dissipation and vice.”