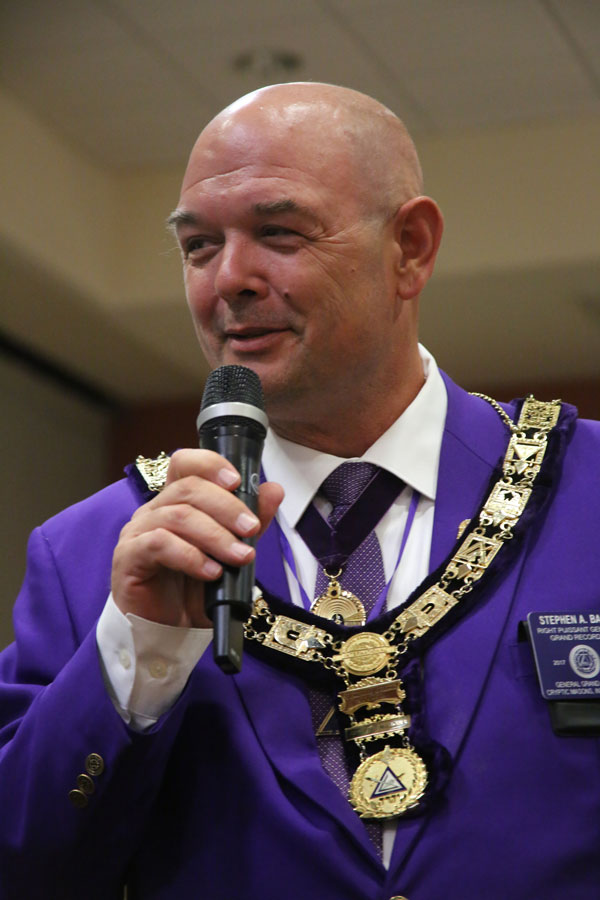 As we turn the New Cryptic Year, many of the ongoing projects have made great progress but are taking a longer time while we work with restricted resources. Simultaneously, however, we are launching several ideas and projects either internally or with the help of jurisdictions. Our approach to this is to break down the major projects into “Sprints” and continue seeking Companions who wish to contribute to the path we are following (shameless plug: PLEASE consider taking on something if you would like to be a part of a close knit, low number, communicative, and intentionally directed team). 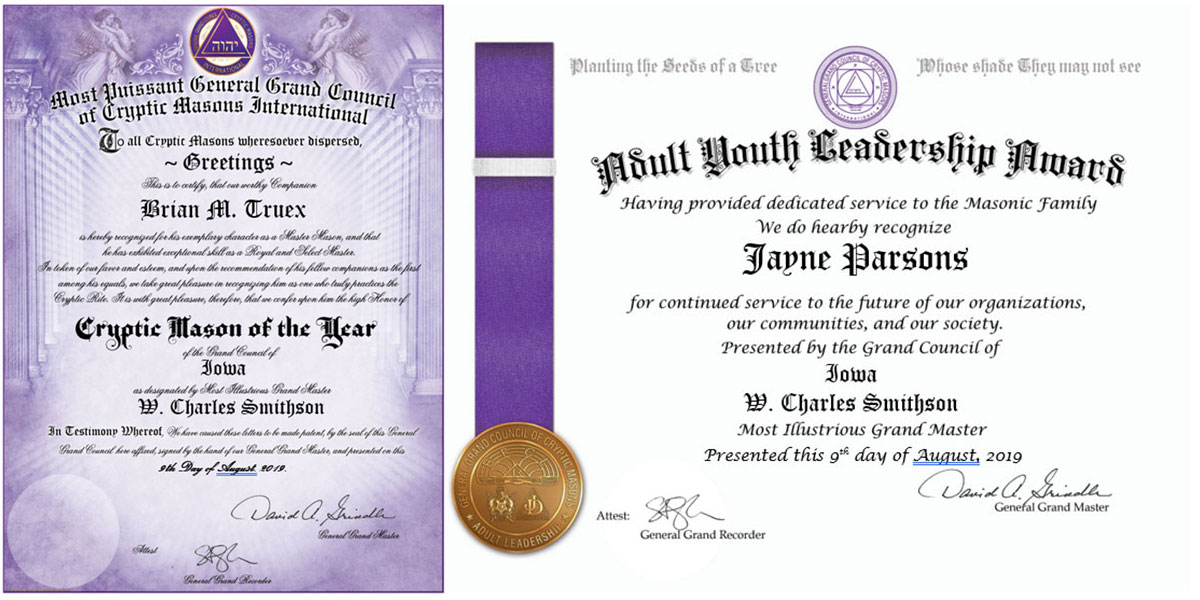 The First Responder project started with a phone call regarding the Veterans Award earlier this year. Illustrious Companion Arthur Patrick of Liberty Council No. 7 in Hattisburg, MS was inquiring about ordering the Veterans Award and made mention of how nice it would be to have an award recognizing those that serve their local communities. After consulting some First Responders, this idea was taken to the Trustees and was well received. Several revisions took place within meetings and ideas, and when the final components were put in place and “prettified” by RPC John Bridegroom (made to look like a jewel would), he put the finishing touch of the angels on the sides of the triangle as they are looking down to protect and pray, it was approved. Since the award directly targets people who are invested in their community, the program has been structured as a tool for ALL of the Masonic Family, through a local Council or Cryptic Companion, to reach out and provide support for their community. Thank you, Companions Art and John, for helping to introduce this great opportunity! 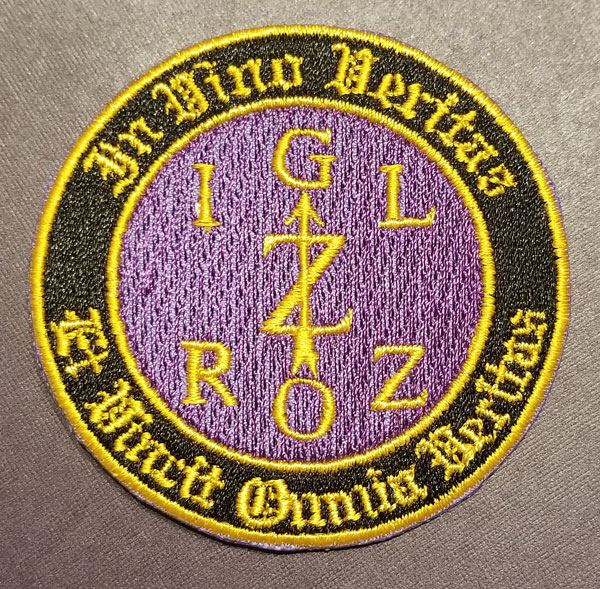 Right Illustrious Grand Recorder Chuck Wood of Indiana is a founding member and the Grand Brewmeister for the Royal Order of Zanzabar.   While this group is intentionally “unaffiliated” so that it may allow anyone to join, the main purposes are to enjoy spirits and fraternity, to keep in mind that there is a lighter side to our organizations (or should be), and to fund Cryptic Masons Medical Research Foundation. For only $1.00 donated in the name of the Grand Council of Indiana per member, you can introduce this in/as a fun event and start a local drive for CMMRF.

In Arizona, I became aware of another program – it was awarded to my Lady, Michele. A certificate and beautiful medal – CYRUS, KING OF PERSIA award was given to her “… and is awarded to a non-York Rite Mason whose virtues, actions and community involvement embody and exemplify the ideals of the York Rite.” This Grand Chapter of Royal Arch Masons of Arizona program is another idea worth its weight, bringing forth the teachings of our degrees and Sacred Law references and reaching out to those outside our ranks! Thank you MEGHP Bob Richards, MEPGHP Joe Zito, and RESWRDGGHP Chad Burks for recognizing my Lady for her contributions! 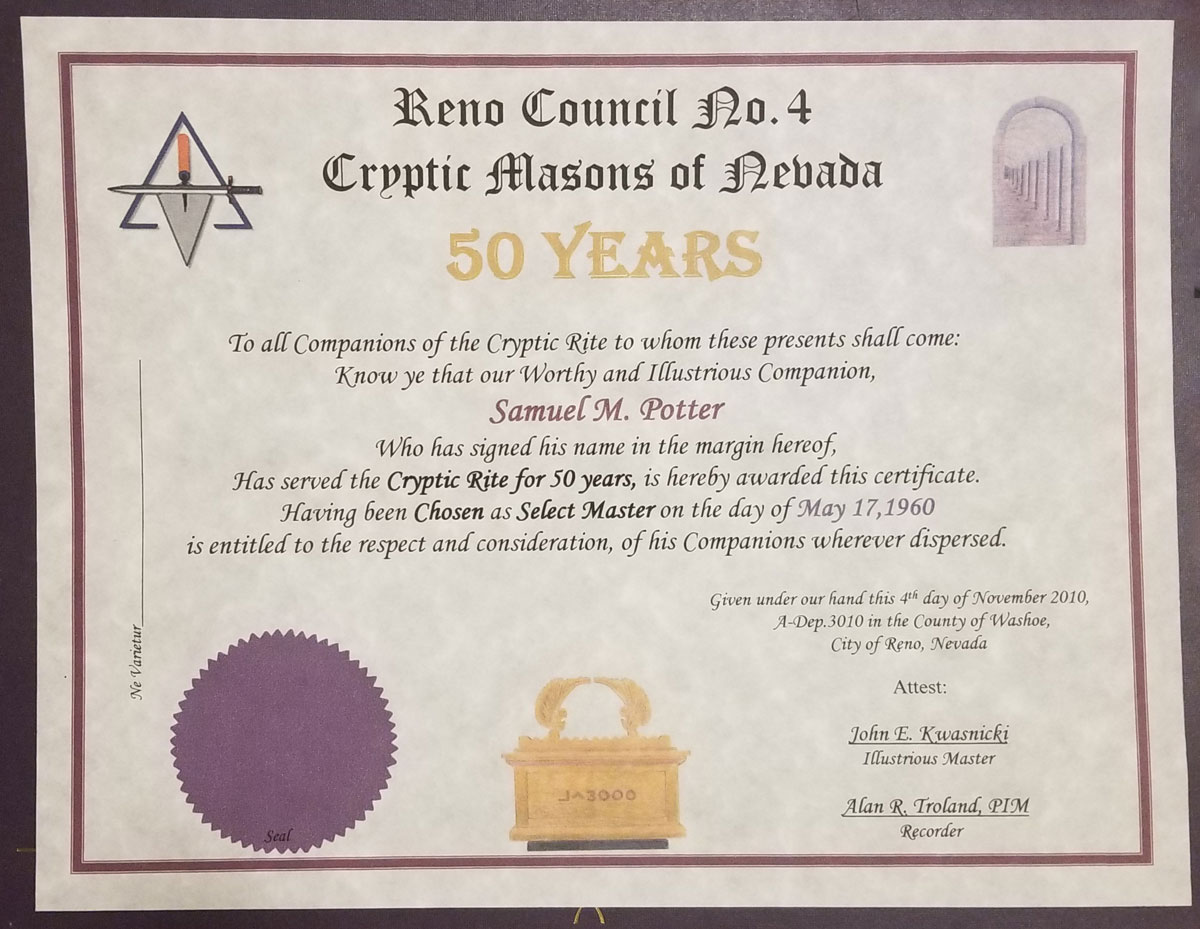 Also in Arizona, and in Nevada, Companions are putting together “New Member Packets”. Right Illustrious Companion Rod Wagoner, GPCW presented one at last years’ Southwest York Rite Conference and Illustrious Companion Alan R. Troland of Reno Council No. 4 provided his subsequent to my visit. These packets give “the rest of the story” for a new member and encourage them to participate. Further, Companion Alan has been distributing 25 and 50-year certificates to his Grand Council for several years.

There are many opportunities for our Companions and Brethren to highlight positive contributions that we would all like to know about. If you or your jurisdiction have a program that works for you, or have an idea which might improve current programs (like the certificates for existing awards), please consider writing an article about it, contributing it for a reference for others (like Arizona’s Ish Sodi requirements and ritual), and/or bringing it to the attention of others. These are the programs that allow us to show appreciation to those in and out of our organizations and may just serve other purposes simultaneously. 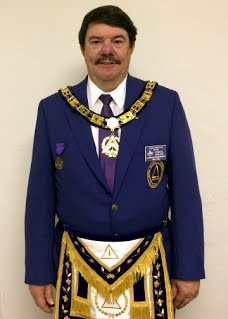 Reno was the site of the 2019 Nevada Grand Sessions, in case you are unaware, both the Grand Lodge and the Grand Sessions rotate between Reno and Las Vegas annually. Right Puissant Companion Bill Snyder and I were welcomed and, as usual, treated as family. Even though Nevada is having some of the same issues that all of us are experiencing – and perhaps, even more pronounced due to their size – they are working diligently to inspire their members and preserve the Craft; further, all three bodies voted to directly and financially support a Grand Lodge community outreach program! Most Illustrious Companion Craig A. Phillips ran a tight Grand Assembly, AND THEN STEPPED UP TO THE PLATE AGAIN. We are all aware that sometimes we have some circumstances that preclude our plans for continuity – Nevada is having such a time, except our Most Illustrious Companion said “no – we are not going to put people in uncomfortable positions” and accepted another year of service. THANK YOU, Companion Craig, and may you have another great term! 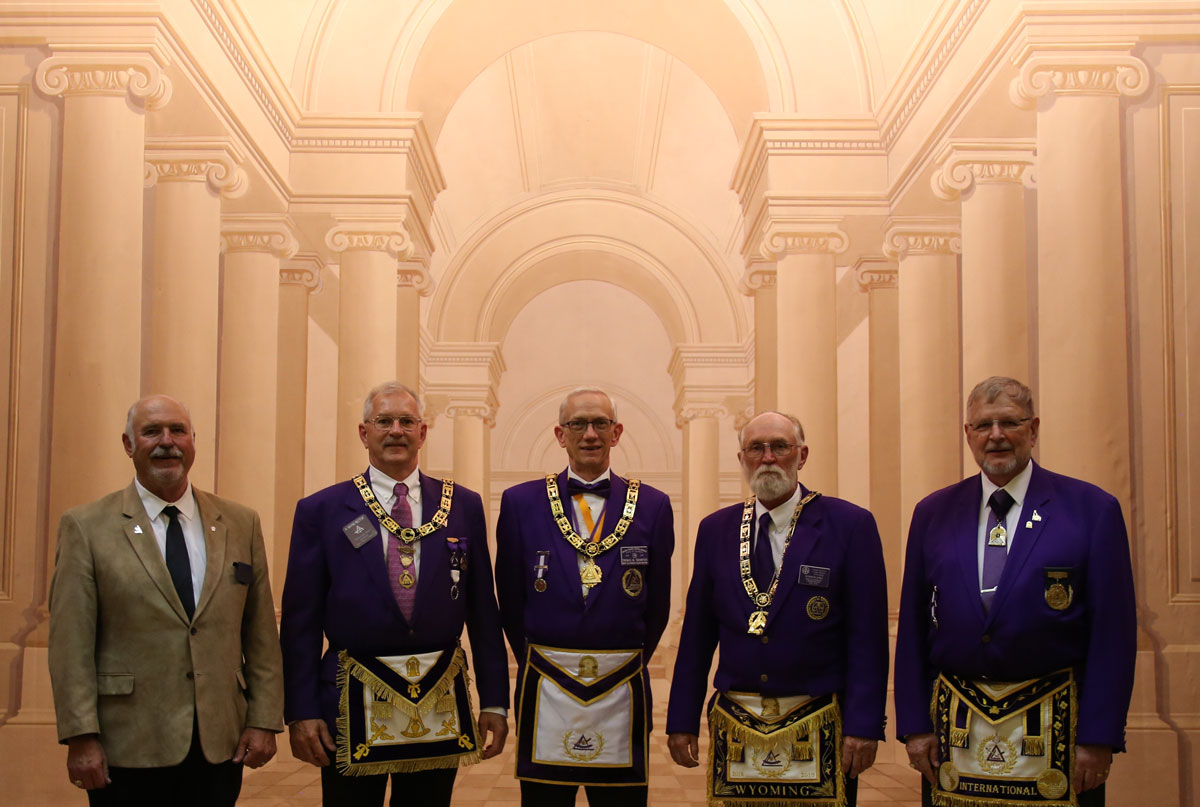 The Great Plains Rendezvous, a three-state Cryptic Festival with Colorado, Kansas, and Wyoming was held in Cheyenne, Wyoming this year. Celebrating 25 years of this outstanding program, I have found that it is one of the best kept secrets in Masonry outside of these three states! On June 29, 2019, each state took a degree, and the Most Puissant General Grand Master and I were welcomed with open arms and some OUTSTANDING degree work. Most Illustrious Companion Wayne Long hosted this year and oversaw the creation of several Royal and Select Masters and 32 Super Excellent Masters! Please take a look at his article and plan to attend next year! A special thanks to Illustrious Companion Harry Furrey as well, a great Companion, host, and the Companion who introduced me to this wonderful event! 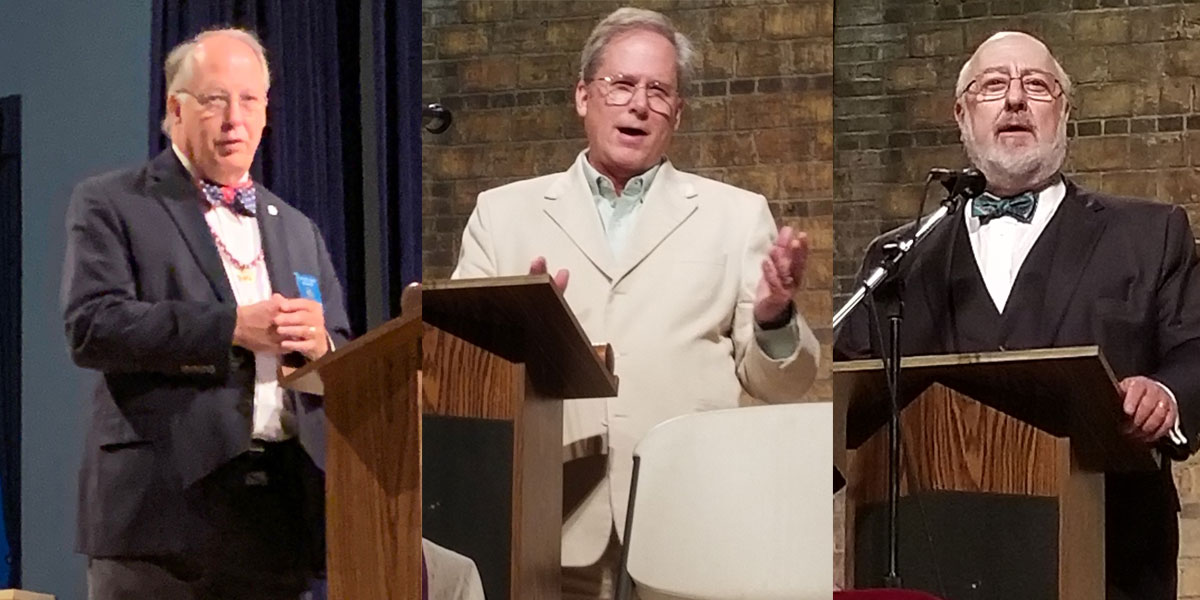 The first trip to Maggie Valley has convinced me that it should be a high priority on an annual basis! Right Puissant Companion Monty Glover and I enjoyed a relaxing, inspirational, and educational week in North Carolina with a great many ACTIVE York Rite Masons! It started for us with the Grand Master of Masons of North Carolina, Most Worshipful Brother D.M. “Mack” Sigmon, giving a FANTASTIC performance as Principal Sojourner in the Royal Arch. As I understand it, this was a break from recent tradition to do the Chapter degrees, but this Summer Assembly in North Carolina has been going for 82 years – may not be the first time! An outside barbeque, three outstanding keynote speakers, MWB D. M. “Mack” Sigmon, MWB Glen Cook, PGM Utah and Deputy Grand Master of Allied Masonic Degrees USA, and MWB Joseph S. Crociata, PGM of Washington D.C. and ME Great Chief of the Grand Council of Knight Masons USA, and time to meet with dignitaries from all over the country! Companion Mack has shared his speech with us and we are hoping Companions Glen and Joe will have time to as well! 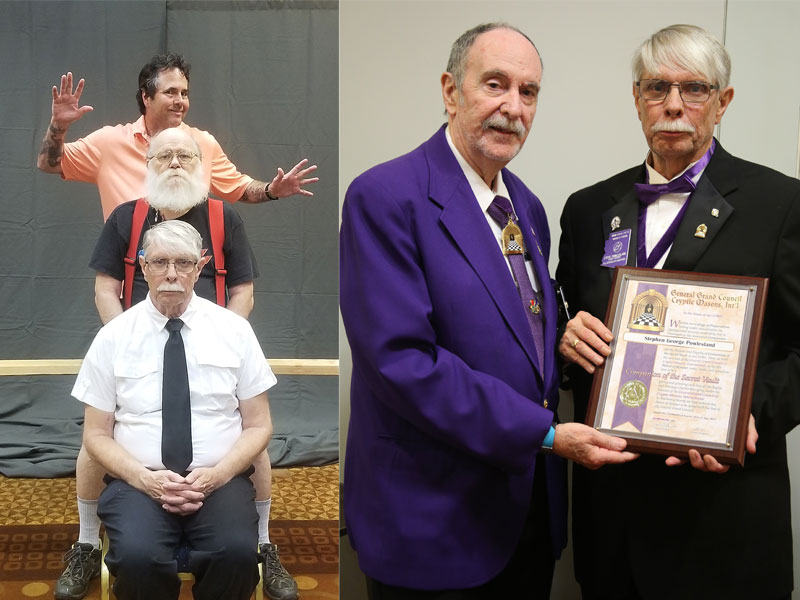 Sound, Camera, Action! – One of the things that Stephen Powelsland is best known for is his contribution to Colorado River Fall Festival, Sessions, and many events as the “Sound Guy”, Kerry Owen, Dean, is usually the one with a camera as his jewel, and POPO the Clown A.K.A. RE Grand Commander Darrel D. Mandrell is fairly well known for clowning (and photo-bombs). Photo right is Right Puissant Companion James Baum, SWRDGGM, presenting Honored Companion Stephen Powelsland with his CSV Plaque.

Several articles have and will continue to share some of the many activities in Arizona. They are certainly doing some great work and are sharing it with those who will find it useful! Most Illustrious Companion Joseph F. Zito has had a great year in spite of health issues and his Lady Angie is one of the strongest and most supportive people I have had the good fortune to meet – to both him and the York Rite! They wrapped up the year with their new College of Preservation Dean, Illustrious Companion Kerry Owen, following through on his charge by marshaling in Most Illustrious Companion Stephen G. Powelsland (not jr.) as a member of the Arizona College and a Companion of the Secret Vault. 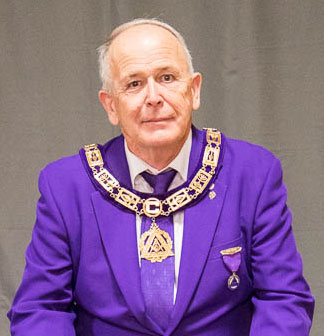 Most Illustrious Companion Darius G. “Mac” McClintock started the year off with brevity as his installation was the last item of business for the Sessions, but also with planning that was apparent and continuous throughout the Sessions! Congratulations Companions Stephen and Mac, great things to come in Arizona! 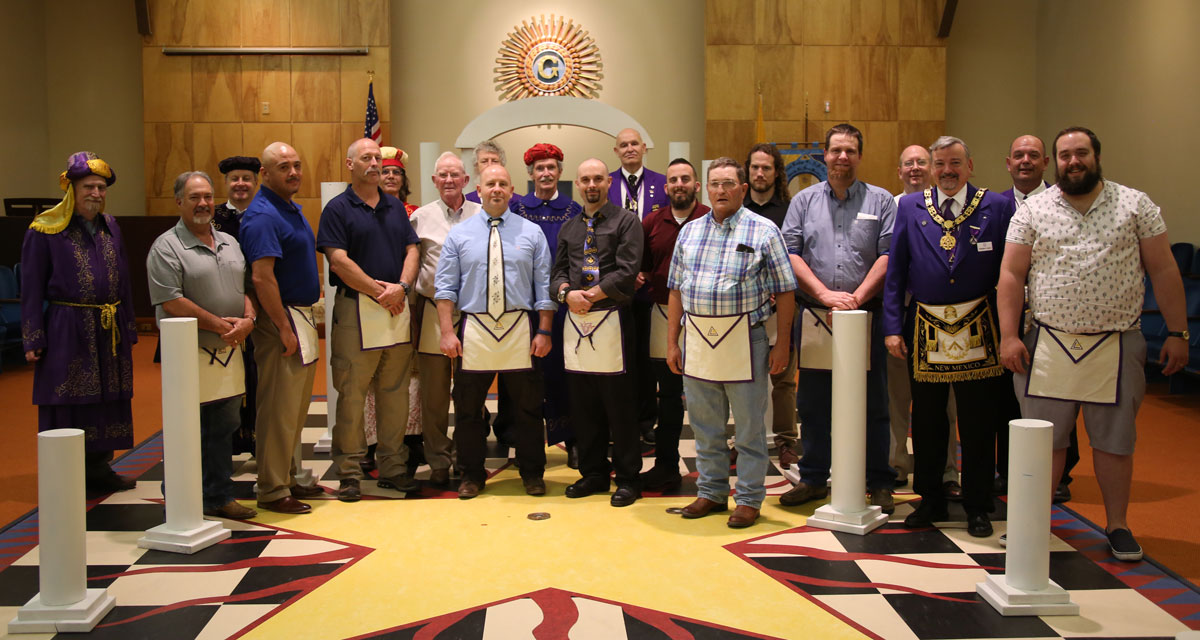 Well, Masonry has a way of exposing those who travel to a great many ideas, and you can get caught up in them quite easily! Some of the excellent experiences that have happened in New Mexico include Route 66 DeMolay Installation of officers, Ashlar Assembly (IORG) Installation of officers, a Grand York Rite and a Grand Chapter discussion group, the Land of Enchantment Festival (9 new Companions), and our Grand York Rite Quarterly. My personal thanks to Most Worshipful Grand Master Ralph A. Easley, Most Illustrious Grand Master Christopher A. Larsen, Sir Knight D. W. Winchester, PGC, Grand Commander, and Most Illustrious Companion Dion A. Newhouse, Grand Recorder as they have all supported my dual role and continue to make New Mexico York Rite Masonry all it can be!

Well, if you have made it all the way through, thank you! While my articles are long, I hope they are segmented to allow people to be exposed to some of the many things a traveler can experience, some of the many Masons that have and continue to contribute to the Craft, and what we are and will continue to do as General Grand Officers to try to listen, improve and propel the General Grand Council of Cryptic Masons, International into a future of realized potential as the preserver of our Masonic heritage.