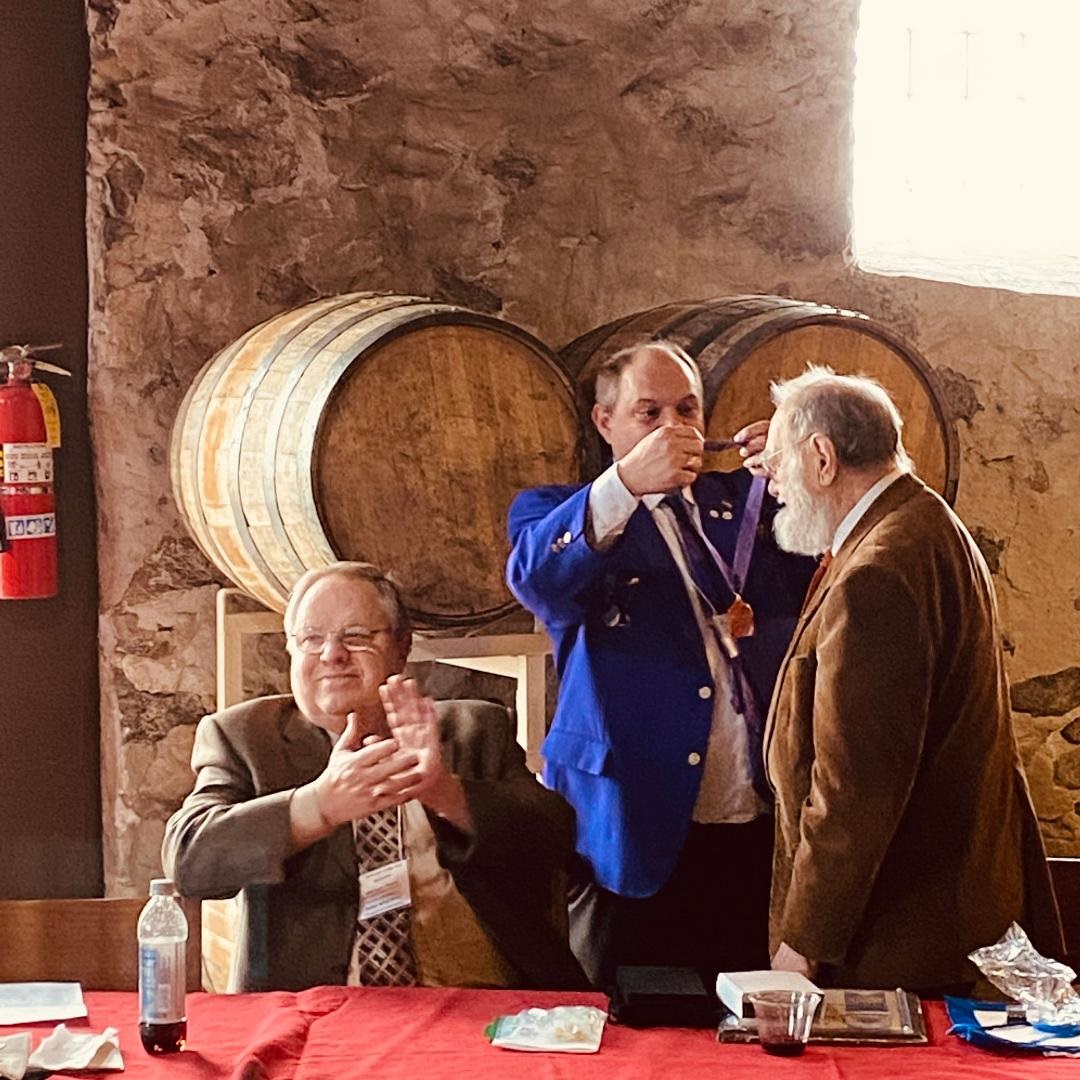 George is not one to be lacking for words. His wit and humor is well remembered by many. After receiving the various presentations he was asked for comments. He stood up and said that he probably couldn’t remember what to say so he made some notes. Out from his pockets came nearly a ream of paper with notes noted on several pages in magic marker. He said, nearly choked up, that this event will be one well remembered by him and to please excuse him from not reading off of his notes.

Waterloo Lodge has a very limited amount of members and if I go overboard then we have twenty members. Yet, we will have six to ten come to a Stated Meeting and it has been a real pleasure having George there.

George Socha has been a very committed member of the Lodge. He will accept any position with the exception of Secretary, Treasurer or Worshipful Master.

Here during a meeting after the COVID restriction being partially lifted he is intently listening to the discussion. Everyone is in excess of six feet apart so no ask would be required. A historic list of Past Masters is on his column along with the budget and a small bottle of hand sanitizer Yet during the meeting we determined to give $12,100 to the local Fire Department for the life line or HELP-I’ve-fallen-and-can’t-get-back-up system they manage. George doesn’t need one but is contemplating getting one – just in case.

George served Waterloo Lodge as Master in 1977 and 1984. He is the first one to arrive in a suit or Tux. But just to come to a stated meeting to eat supper, pay bills, talk and have fellowship then day clothes are the order. Is not the internal not the external qualifications that make a man a Mason? From May to September the Lodge holds 3 or 4 potluck cookouts. The Lodge supplies the outdoor grill, meat and buns and the membership brings something to pass.

George makes hot German Potato Salad. And yes, my bride has asked for the recipe. Golly, After being in the Lodge for 25 years, his dad told him that he was going to a Festival that weekend to join the York Rite. George did not complain. He entered the Chapter of Royal Arch Masons on 10/21/1971, Council of Royal & Select Masters on 10/22/1971 and Commandery of Knights Templar on 10/22/1971. 75 years a Mason and 50 years as a Companion and Sir Knight, simply amazing!

He also joined the Scottish Rite. The Reunion started 18 October 1980 and finished 1 November 1980. 41 years of wonderful service in Madison Valley.

George has served as the presiding officer for Lodge F&AM, Chapter RAM, Council R&SM, Commandery KT and Priory KYCH. He did it the old fashioned way – by request of the officers to get into line.

In 1983, He was selected to be a Grand Representative to Mississippi for Grand Chapter RAM and also for the Grand Council R&SM. He has enjoyed going there and enjoying their fellowship. He does have a story or two that he could tell, if it was appropriate. He served as Most Illustrious Grand Master of the Grand Council Royal and Select Masters of Wisconsin in 1990. For the next 15 years he was very involved with the Ish-Sodi Degree that we have our Great State.

He served as Eminent Prior for Wisconsin Priory, Knights of the York Cross of Honour during 1994. Closer to home — Tri-County Chapter or Tri-County Council is dark for November and December. But here in November we gathered for the presentation of the Mark Master Mason Degree for seven candidates.

George had one of the most precious seats in the degree – that of sideliner. It matters not if the team presenting does a magnificent job presenting the degree if the sidelines are empty. Full sidelines make a much greater impression then empty ones.

December we are gathering again, although we are “Dark”, to present the Past Master and Most Excellent Master Degrees. The positions have not been filled. It will be interesting to find out what part he has that day.

We were talking about presenting the Royal Master Degree. As luck would have it he was asked, before anybody else, what part would he present. Without hesitation he said Conductor of Council.

At a Commandery Conclave we were making plans for our annual Inspection and Homecoming. Presenting the Order of the Temple for that event is always an interesting adventure. George was questioned about what he would do. Hermit was his answer, because, he said that he is starting to feel his age. 12 Feb 2022 he was the First Hermit dressed in green.

But wait that is not all he has served the Experimental Aircraft Association (EAA) for many years. He has been present for every EAA gathering in Oshkosh since before I’ve known him. But, for some odd reason he doesn’t want to drive (fly) a plane anymore. Ah, more stories. Ocean diving around the world and taking underwater photos is also one of his forays. And yes, he has hundreds of photos. After his significant other passed, for some odd reason, he doesn’t want to go diving again without her but the stories he can tell.

George – a man of multiple talents, years of experience and marvelous stories.

It is needless to say but we will – George, we love you as you are & thanks for being there for us.

We will be celebrating his 75 years in Masonry, 50 years in the Chapter RAM, Council R&SM and Commandery KT on 10 April 2022 at Stable Rock Winery and Distillery in Jefferson