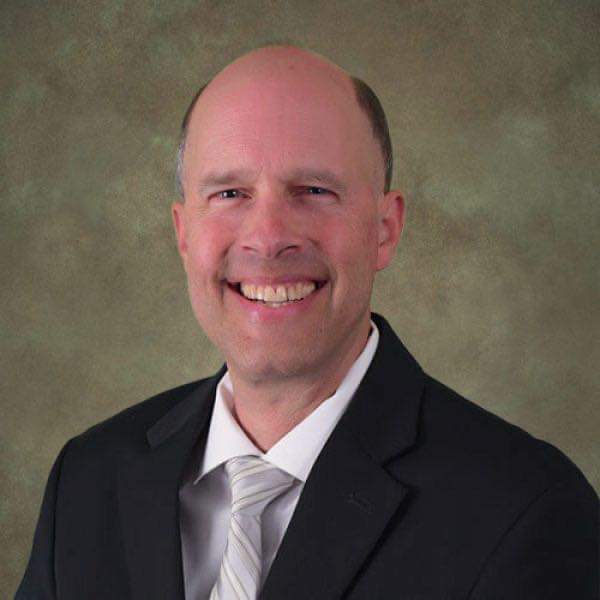 This is part one of what I hope eventually to be a three-part series on different aspects of the number three; which seems rather appropriate! This particular part grew out of some brief comments I had made during an allocution at our Grand Council Annual meeting several years ago. Essentially I was trying to re-imagine the American York Rite progression, starting from Chapter, through Council and then Commandery. The idea was to address the general view of how Council, being the middle in the progression, tends to be treated as a “speed bump” on the way to the final step in our York Rite triad, namely Commandery. In the context of the Symbolic Lodge, I’m sure that we wouldn’t treat the Fellow Craft degree as a speed bump on the way to the Master Mason degree – each degree is an important piece of the greater whole. What I had elaborated on at that time was to propose that rather than look at this progression as a start-to-finish linear process, it would be appropriately symbolic to see it more as an interconnected closed triplet – namely, a triangle.

The number three seems particularly ubiquitous throughout our fraternity and, quite frankly, many other contexts as well. For example, if we start from the middle chamber lecture we would find that, “The number three alludes to the first three degrees of Masonry and to the three principal officers of the Lodge.” Of course, there’s wisdom, strength, and beauty, and the number three is highly valued owing to its allusion to the Trinity in various religious contexts. It’s interesting to note that triplets also appear in some physical examples. We live in a three-dimensional spatial world, and to describe a particle’s motion, we just need three basic variables: position, velocity and acceleration. Ohm’s law relates, in a very simple way, voltage, current and resistance. There are three generations of fundamental particles and three quark colors. Even in a literary and film perspective, trilogies abound. For example, there are three books for the Lord of the Rings, three deathly hallows in Harry Potter, three parts to the Matrix (for now!), Back to the Future, and in a superb feat of Royal Arch-ness, Star Wars is a three-times-three sequence! In fact, a recent article entitled “Masonry’s Three-Point Lessons” in the Emessay Notes (December, 2019) lists a few other familiar triads – Freedom, Fervency, and Zeal, and Faith, Hope, and Charity to name a couple. The list of course goes on and on, as we can all imagine the possibilities.

So why a preoccupation with the number three? I think it appeals to our sense of stability. We all learn in elementary geometry that in two dimensions, the smallest closed polygon is a triangle; and if we make all three sides equal we have our highly symbolic equilateral triangle, or delta. If you want to stand something on a flat surface, two legs clearly isn’t stable, it will fall over. However, three legs just does it: in fact, three points uniquely determine a plane. On the other hand, four points over-determine a plane, as most of us have already discovered with wobbly four-legged tables at many restaurants! In three-dimensions, the smallest polyhedron is the tetrahedron, which is made up entirely of (four) equilateral triangles. That there are three triangles making four sides adding up to seven also lends some depth to the symbolism here! As most readers know, the five simplest polyhedra are the famous Platonic solids – tetrahedron (4 sides), hexahedron (6 sides), octahedron (8 sides), dodecahedron (12 sides), and the icosahedron (20 sides). In fact, these are the only solids that can be made up of only one type of face. Interestingly, three of these solids are made up entirely of triangles, the tetrahedron, the octahedron, and the icosahedron.

As for our American York Rite, I think that the feature of simple stability and interconnectedness offers a more unifying way in how we see the relationship between these bodies. We’re all familiar with going through these degrees/orders starting with Chapter, then Council and finally Commandery. We also know that this is not chronological, since then we should start with Council. On the other hand, it is certainly possible to illustrate the end first, that is Commandery, and then back up and fill in how we got there; a sort of reverse chronological approach. To me this illustrates that, at a fundamental level, although you have to begin and end somewhere, it’s somewhat arbitrary, and where you start appeals to different ways of looking at it. Of course in some instances, there is a well-defined starting point, such as with our symbolic degrees; however, the interconnected concept still applies. On that note, if we reflect a little on these first three degrees, “Freemasonry gave to you one part of herself in the 1st degree, another part in the 2nd degree, and another part in the 3rd degree. Do not be tempted to look upon the Fellow Craft degree as a mere stepping stone to the Master Mason degree.” [Authors note: I lost the reference to this quote – any help would be appreciated!] This is a very important point and relates to the fact that all parts of the triad have their place in the system. Thus the idea of connecting each of the three parts not in a line, but in a closed triangular figure.

I should point out that, from a topological point of view, the triangle is “deformable” into a circle – which has the ultimate symmetry since there is no unique beginning or end; it doesn’t matter where you start at all. Below is an example of a Chapter-Council-Commandery triangle – it is even better that the three bodies all share the same letter, “C”, which happens to be the 3rd letter of our alphabet! 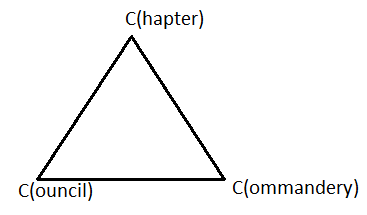 So, as I mentioned in the beginning, I’d like to re-imagine how we see the relationship between these various trinities, especially in regard to what might be called the “middle” one. Rather, each part has an important role to play in the stability of the whole; take one away and the structure fails. Perhaps there’s a hidden message there if we reflect a little on the Council symbol, the Royal Master degree and the particular symbolism of the triangle in that case!