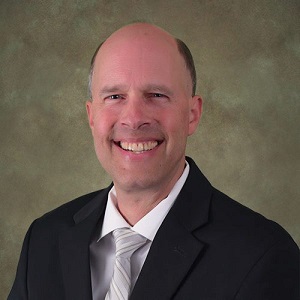 On Sunday October 23, 2022 during the October Fire Side Chat, RPC Sandy Karstens spoke on “Love of Learning is a Guide of Life”. The video is now available at the link below.

Love of Learning is a Guide of Life Video

William “Sandy” Karstens IV was born on February 5, 1960 in Norwalk, CT, the son of Judith and William Karstens. He resided for several years in New York City before moving to Montreal, where his father played for the Montreal Symphony Orchestra and his mother danced for Les Grands Ballets
Canadiens. Before finishing high school his family moved back to the US in Franklin, VT where he subsequently graduated from Missisquoi Valley Union High School in 1977. He then attended the University of Vermont graduating in 1981 with a B.S. degree in physics. Following this he received his Masters degree in 1983 from Brandeis University and Ph.D. from the University of Vermont in 1990. He joined the faculty at Saint Michael’s College in 1993, has served two terms as Chair of the Department of Chemistry and Physics and is a full professor in the Department of Physics.

Sandy has been involved in Scouting since 2004 when his son first joined Cub Scouts. He has been a Den Leader and Assistant Scoutmaster as well as serving as the Advancement Coordinator for Troop 692 in Williston. He is a Brotherhood member of the Order of the Arrow, Ajapeu Lodge 351, and has served as the Chapter 3 adult advisor. He has been President and Secretary of the Vermont Chapter of Sigma Xi, the Scientific Research Society and has served as President and Secretary of the Gamma Chapter of Phi Beta Kappa at Saint Michael’s College. For recreation, Sandy enjoys canoeing, camping, and bike riding.

On February 18, 2004, Bro. Sandy was raised a Master Mason in Washington Lodge #3 in Williston and served as Master from 2008-2011. For the Grand Lodge of Vermont he served as Grand Tyler (2011-2012), Grand Junior Steward (2014-2015), and District Deputy Grand Master, District #5 (2012-2014). In June of 2017, Bro. Sandy was appointed by Bro. Victor Stone, Most Worshipful Past Grand Master, to the Grand Lodge progressive line as Grand Lecturer and is presently the Grand Senior Warden. Sandy joined York Rite in Burlington Chapter (No. 3), Council (No. 5) and Commandery (No. 2) and was knighted on December 22, 2004. He served as Eminent Commander from 2007-2009, High Priest from 2009-2010 and Thrice Illustrious Master from 2010-2011. He has also served as Grand Commander of Vermont from 2011-2012, Grand High Priest and Most Illustrious Grand Master of Vermont from 2016-2017. He has served the General Grand Chapter and General Grand Council as Ambassador for Vermont, 2017-2020. He is presently the Regional Deputy General Grand Master, Northeast, for the General Grand Council of Cryptic Masons International. Sandy joined the Scottish Rite, Valley of Burlington and received his 32nd degree in April of 2004. He has served as Sovereign Prince in the Council of Princes of Jerusalem and Commander-in- Chief for Vermont Consistory. He was coroneted with the 33rd degree on August 28th, 2010 in Philadelphia, PA, has served as a Deputy’s Representative and the Membership Chair for Vermont Council of Deliberation. He was elected to the Supreme Council as an Active member for Vermont in August 2019 and became Deputy for Vermont in August 2021.

Bro. Sandy is a Past Puissant Sovereign of Bethlehem Conclave, Red Cross of Constantine, Past Eminent Governor of the Green Mountain York Rite College #139 and Past Eminent Prior for the Knights of the York Cross of Honor, Priory #45. Sandy received the Order of the Purple Cross on July 31, 2021 and is now serving as Grand Governor for Vermont. He is a Past Sovereign Master, KCRBE, of the Allied Masonic Degrees, for John Harris Council #458, and a member of Scenic Council #37 of Knight Masons, both in New Hampshire. He is the Celebrant for the Vermont Rosicrucian College, SRICF. He is also a member of the Grand College of Rites, Knight Templar Priests and the Royal Order of Scotland. He is the recipient of the 2013 Cryptic Mason of the Year award and the 2019 Grand Lodge of Vermont John Barney medal.