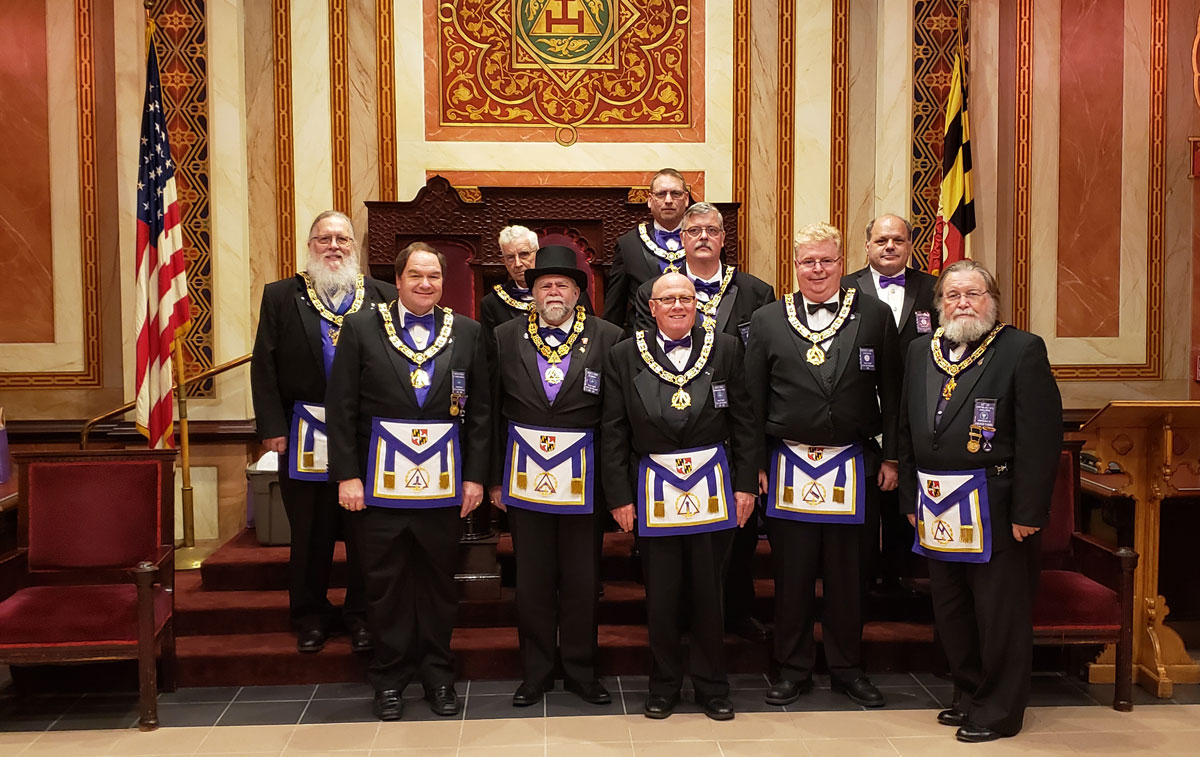 It is my pleasure to bring you up to date on some very significant Grand Council activities over the past six months.  On July 26th the Grand Council hosted a Table Lodge in “Friendship Hall” at the Grand Lodge in Cockeysville, Maryland.  Distinguished guests included our MIGM Robert Lumbert, MWGM Kostas Vourvoulas, REGC Spyridon Treklas, and myself (MEGHP).  In all, over fifty (50) men were in attendance.  Each one was given a “Canon” for the evening.   For those unfamiliar with the term “Canon,” it is a specially designed shot glass for Table Lodges.  The event was held in the basement of Friendship Hall.  The entire basement consists of a “Red Room,” the meeting room for the Council and Chapter, and the “Gothic Room” for the Commandery.   Because of logistics, the Table Lodge was held in the Gothic Room.

On the first and third Saturdays in October all three York Rite Bodies held a joint Festival, dedicated to the memory of Companion Carl J. Wisner, a most honorable Companion in Maryland Masonry, especially the York Rite, who passed away last year.   The Grand Council and the Grand Chapter meet the first Saturday (October 6th) following the Grand Lodge of Maryland’s Harvest Home Day.  This is an annual gathering, hosted by the Grand Lodge of Maryland, for all Masons of Maryland.  Many of them start gathering in the dark hours of the morning for this event, where there are unlimited supplies of Sausages, Pancakes, Pumpkin Pie, and Coffee available to them.

The Grand Council and the Grand Chapter followed with the conferral of their degrees.  The candidates came from the nineteen individual Chapters across the state who had been asked to confer the Mark Master and the Past Master Degrees in their home Chapters.  Twenty-nine Companions were present that morning.   At the request of the MEGHP, Enoch Chapter No. 23 (Frederick, MD) conferred the Most Excellent Master Degree, followed by the Grand Chapter conferring the Royal Arch.  After lunch, the Grand Council conferred the Royal and Select Master degrees.  Two weeks later, on October 20th, the Grand Commandery met in the Gothic Room to confer the Commandery Orders.  Thirty-three (33) Companions were Knighted in the Order of the Temple.

On the weekend of October 26th – 27th, Maryland York Rite Masonry held a joint York Rite Grand Session, where all three bodies came together to hold their annual meetings.  The Grand Council Assembly was Friday evening, followed by the Grand Commandery Conclave on Saturday morning, and finally, the Grand Chapter Convocation on Saturday afternoon.  The banquet that evening was attended by over 100 members and guests.  During the evening, we raffled off nine baskets to raise funds for the Charities sponsored by each body.  The three-way split resulted in our being able to donate three hundred dollars ($300.00) to each one (CMMRF, RARA and KTEF).

We were pleased to have the Most Puissant General Grand Master of Cryptic Masons, International, Brother David Grindle in attendance for the whole weekend.