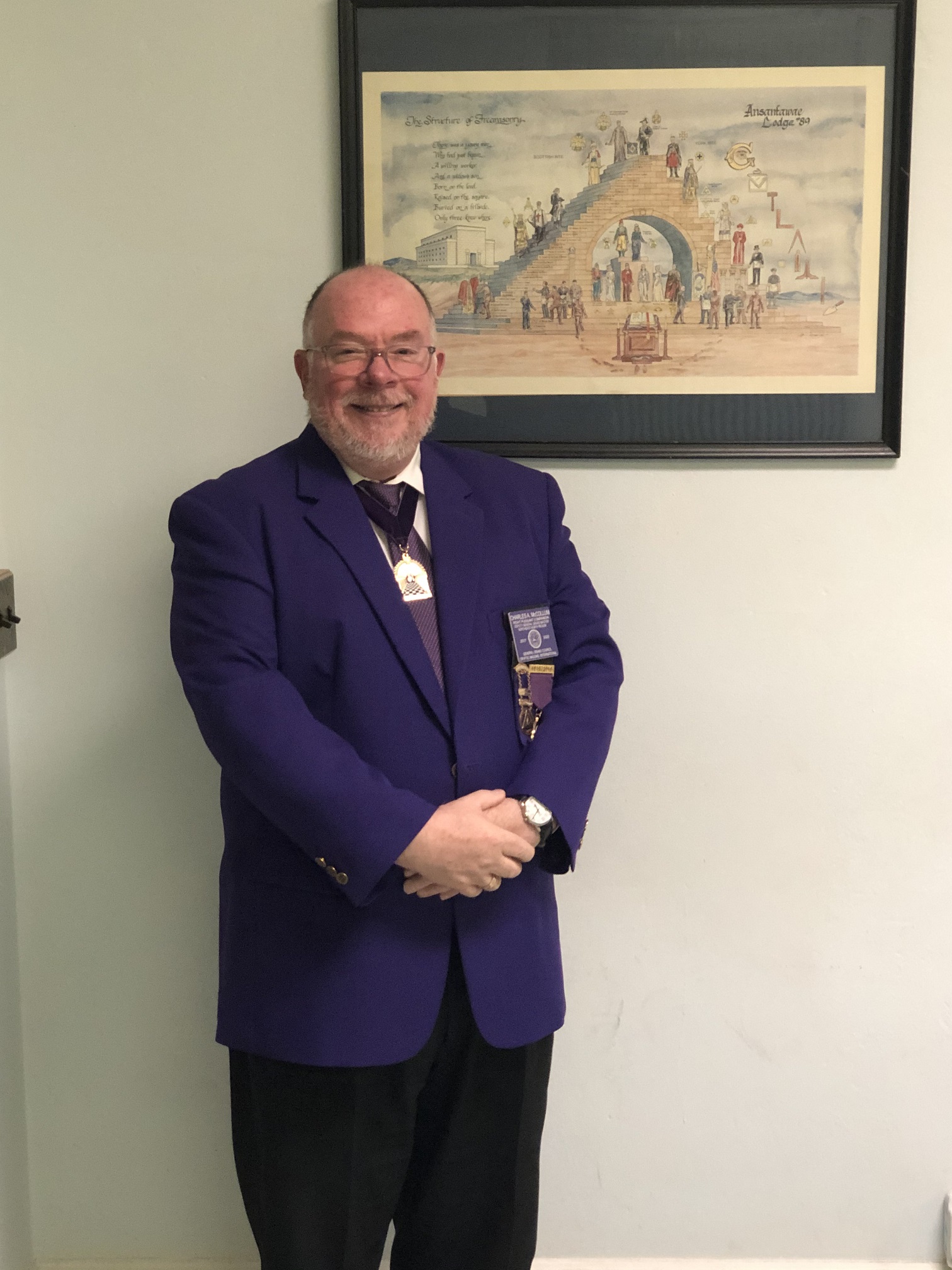 Charles Andrew McCollum was born on September 3, 1962, in Cheverly, Maryland to Charles J. and Evelyn (Daigle) McCollum.  At age three, his family moved to Sabetha, Kansas where they resided until Chuck was ten when they moved to Newburyport, Massachusetts.  Chuck attended Newburyport public schools, graduating from Newburyport High School in 1980 (35 years after his father had graduated from the same high school and 28 years before his youngest son did the same).  While in high school, Chuck enlisted in the Army National Guard, taking basic training at Fort Dix, New Jersey immediately after graduation.  He went on to earn a Bachelor of Science degree in Business Administration from Salem State College and an ROTC commission as a second lieutenant in the National Guard.

After graduation, he entered active duty in the U.S. Army.  He took his basic infantry officer and airborne training at Ft. Benning, Georgia, and was assigned to the Berlin Brigade, Germany.  While in Berlin, his first son, Sean was born.  Chuck and his family left Berlin in January 1989, only months before the wall came down.  Their next duty station was Ft. Lee, Virginia where Chuck took his advanced officer training and Parachute Rigger training, followed by assignment to the XVIII Airborne Corps at Ft. Bragg, North Carolina, where his second son, Kevin, was born.  While at Ft. Bragg, Chuck was deployed to Saudi Arabia as part of Operation Desert Storm, and to Florida following Hurricane Andrew.

Following the completion of this tour, Chuck left the army in 1993 and took a job as a sales representative for Philip Morris in the Stamford, Connecticut area.  He advanced to Unit Manager and was assigned to Harlem, in New York City.  He left Philip Morris in 1997 and was employed as the Church Administrator for the First Presbyterian Church of New Canaan, Connecticut until September 2016.  After being introduced by Scott Sherrick in 2007, and following a whirlwind courtship, Chuck married the love of his life, the former Beth Ruskin in June of 2008.

Brother Chuck’s Masonic career began in Massachusetts, where he was raised in March 1984 by his future father-in-law in Warren Lodge of Amesbury, Massachusetts.  He was appointed Junior Deacon that year, but entered active duty before he could progress through the line.  While on active duty, he visited lodges in several jurisdictions and continued to study ritual work.  After leaving the army and settling in Ridgefield, Connecticut he affiliated with Jerusalem Lodge #49, serving as Worshipful Master in 1997 and 1998.  He affiliated as a dual member with Union Lodge #40 in 1998, serving as Worshipful Master in 2001.  He has also served as Secretary of Jerusalem Lodge #49 and Treasurer of Union Lodge #40.  He is a Past President, Past Secretary, and Past Treasurer of the 1st Masonic District Blue Lodge Council, as well as Past Treasurer of the Ridgefield Masonic Temple Association.  He is also a Past President of the Danbury Craftsman Service Club. In the Grand Lodge, he has served as Associate Grand Marshal of District 1A from 1995-1997 and again in 2003, on the Wooster Day Committee, the Membership and Retention Committee, and as Chairman of the District 1 CHIP Committee.  He was appointed a Right Worshipful District Deputy in 2013 and reappointed in 2014 by MW Brother Simon LaPlace.  He is the Grand Representative of the Grand Lodge A.F. & A.M. of Austria near Connecticut.  Chuck served on the Masonic Charity Foundation Board of Directors from 2007-2011.

In the Royal Arch, Companion Chuck was exalted in Washington Chapter #24 in Norwalk in 1995 and later affiliated with Eureka Chapter #23, where he served as High Priest in 1999, 2000, 2004, and 2008. Chuck affiliated as a dual member with Rittenhouse Chapter #11 in 2005 and serves as the Secretary/Treasurer. Chuck was installed as the Most Excellent Grand High Priest of the Grand Chapter of Royal Arch Masons of Connecticut in June of 2005.   In addition, he is Grand Representative of the Supreme Grand Royal Arch Chapter of Ireland near Connecticut.  He has served on the numerous Grand Chapter Committees including the Credentials Committee, Awards Committee, Program & Publicity Committee, Ritual Committee, Welfare of Chapters Committee, Annual Convocation & Banquet committee, Jurisprudence Committee, and Budget & Finance Committee.  He received the order of High Priesthood in 2001 and was appointed to the Convocation of Anointed High Priest officer line in 2002, advancing to become Excellent President in 2007.  He was elected and installed Grand Treasurer in 2015.  He was awarded the General Grand Chapter Medal in Bronze for Distinguished Service and the General Grand Chapter Ritual Jewel in 2015.  In 2017 he affiliated with the newly consolidated Housatonic Chapter No. 13 and was elected Secretary/Treasurer.

Companion Chuck was greeted in Wooster Council #28 in Danbury in 1996, where he served as the Thrice Illustrious Master from 2001 through 2004, and again in 2009.  He received the Order of the Silver Trowel in 2002 and was appointed to the Anointed King officer line in 2009, advancing to serve as Thrice Illustrious Master of Connecticut Council of Anointed Kings in 2014.  He affiliated as a dual member with Washington Council #6 in 2005 and currently serves as the Recorder/Treasurer.  He received the Knight of Ish Sodi award from MPGM Scott Sherrick in 2006.  He was appointed to the Grand Council line in 2007 by MPGM Ray Tomlinson, progressing through the line to become Most Puissant Grand Master in 2013 and again in 2014.  He serves as the Grand Representative of the Grand Council of South Carolina near Connecticut.  He was elected and installed Grand Treasurer in 2015.  In 2017 he affiliated with the newly Consolidated Paugussett Council No. 16 and was elected Recorder/Treasurer.

After serving on the degree team of Connecticut York Rite College #17 for several years, Companion Knight Chuck was invited to join the College.  Companion Knight Chuck has served as the coordinator of the Symbolic Lodge Degree Teams since 1998 and was the Director of the Ritual Cast for the Order of Knight of York from 1998 through 2004.  In 2001 he was awarded the York Rite Sovereign College Service Award for his efforts.  During his time on the cast, where he normally filled the Master’s station, he raised in excess of 30 new Master Masons.  He was appointed to the officer line of the College in 2004 and progressed to serve as Governor in 2008.  He received the Order of the Purple Cross in 2007.  In 2010 CK Chuck was appointed Deputy Grand Governor for Connecticut of the York Rite Sovereign College of North America.  He was reappointed to this office in 2012.  He was appointed and installed as Grand Governor for Connecticut in 2014 and was reappointed in 2016.  He currently serves on the Sovereign College Degree Team for the Order of the Purple Cross.

Chuck is also a member of the Scottish Rite in the Valley of Waterbury where he serves in the ritual cast for most of the degrees.  He has served as the Thrice Potent Master of Doric Lodge of Perfection, Sovereign Prince of Ionic Council, Princes of Jerusalem, and as Most Wise Master of Corinthian Chapter of Rose Croix.  He also served as the Chairman of the Valley of Waterbury Executive Committee.  He served on the Board of Governors of the Children’s Dyslexia Center in Waterbury from 2013 to 2018, where he was the Treasurer.  Chuck was installed as the Treasurer for the Valley of Waterbury in 2008.  He received the Illustrious Arthur M. Brown, 33rd Meritorious Service Award at the 2009 Council of Deliberation meeting.  He was appointed to the Lafayette Consistory Line in 2012 and elected a Trustee for the Consistory in 2013.  At the Supreme Council session in 2015, Chuck received and was coroneted as a 33rd Degree Mason.

Chuck is a member of Mohawk Council #28 Knight Masons and was appointed to the officer line in 2007, advancing to become Excellent Chief in 2012.  He was invited to join Nathan Hale Council No. 78 Allied Masonic Degrees and Connecticut College SRICF in 2009 and has served in both officer lines, including as Sovereign Master in the AMD.  He was invited to join Connecticut Priory No. 28 Knight of York Cross of Honor in 2011 and joined the officer line in 2012.  Chuck was received into Apostles Tabernacle XVIII Holy Royal Arch Knight Templar Priests in 2013 and currently serves as the VE Preceptor.  He became a member of the Royal Order of Scotland in 2018.

Chuck is a life member of the Veterans of Foreign Wars.  He is active in his church, serving as a Sunday School teacher, lay reader, greeter, usher, sound technician, Chair of the Stewardship Committee, and Treasurer.