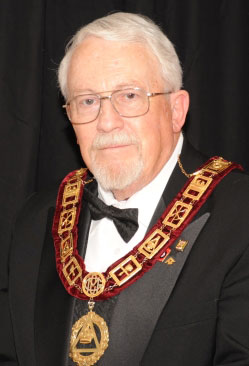 Patrick A. Curtis, Ambassador to Maryland

York Rite Masonry is beginning to spread its wings here in the Mid-Atlantic region, especially in the   Grand Council of Royal and Select Masters of Maryland, under the leadership of our Most Illustrious Grand Master, Companion Robert Lumbert.  He has begun the process of making the Grand Council more accessible to the local Councils.  Bob made it a point to travel to all the Councils in the State.

First he encouraged the Councils to seek to have equal time with the Chapters. Several of our Councils meet jointly with the Chapters in their area, and in many cases most of the meeting has been devoted to Chapter business.  Secondly, we need to show the Companions of the other bodies that the Council is more than a social club, we have important knowledge to share with them.  We are just as important as the other two bodies in bringing further light to all York Rite Masons.

At those meetings as Ambassador for Maryland, I informed the Council about changes with the Cryptic Masons Medical Research Foundation — new leadership and what research they are presently involved with. .

Here in Maryland we presently have about 1100 Council members in sixteen Councils.  Regretfully there are only a few Councils that have enough active members to fill all the stations, while several have some gaps, and a few struggle to get a quorum to hold their Assemblies.   It appears likely that in the next year or two, two of the struggling Councils will be merging with stronger Councils.

Our Grand Master has encouraged the weaker Councils to reach out to the other Councils, to seek their assistance until they can stand on their own two feet.  By being able to do degree work themselves, the Council members will have a sense of accomplishment.  Possibly this will also get the interest of the older members and entice them to once again darken the doors of the Council. It should be noted that Maryland has a strong tradition of Councils assisting other Councils in the conferral of degrees (and similarly in Chapter and Commandery).   But we are working to have every Council capable of conferring both degrees with its own members.

We have two very important events coming up in October.