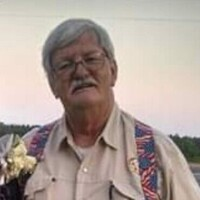 “No one hears the door that opens
When they pass beyond our call
Soft as the dropping petals of a rose.
One by one our loved ones are called.
But the memory of each one,
Like the fragrance of the rose
God sends to linger with us
Till our own life’s door is closed.”

MacArthur Davis, age 77, of Barnett Crossroads, AL passed away on September 16, 2020 at his residence. He was born on February 7, 1943 in Century, FL to the late Mitchell O’Neal and Hazel Beatrice Lambert Davis. He served in the United States Army, former Police Chief of the City of Atmore, retired investigator with the Southern Portion of the State of Alabama Department of Corrections. He was a Mason, Past Master of Carney Lodge #549 and Huxford Lodge #779, 33rd Degree Mason, member of the Scottish Rite, York Rite, Eastern Star, The Order of the Amaranth and was a Shriner. He served in many elected and appointed offices of the Masonic Fraternity. He was a member, deacon and adult Sunday School teacher for over 30 years at New Bethlehem Baptist Church in Barnett Crossroads.

He is survived by his wife, Nancy Grissett Davis. If he would have lived until September 18th, they would have been married 56 years; his son, Darren O’Neal Davis; his daughter, Pamela Denise (David) Cousins of Wetumpka, AL; his grandchildren, Danyell Davis, Courtney Davis, Haley Davis and Shelby Cousins; one great grandson, Kyllo Scott; his sister-in-law, Mary E. Morgan; his brother-in-law, Jerry E. Grissett and many nieces and nephews.

Active pallbearers will be The Masons.

For the safety of you and others, please practice social distancing requirements, though wearing a facial mask is strongly encouraged.

In lieu of flowers, donations can be made to a charity of your choice.

Johnson-Quimby Funeral Home is in charge of all arrangements.