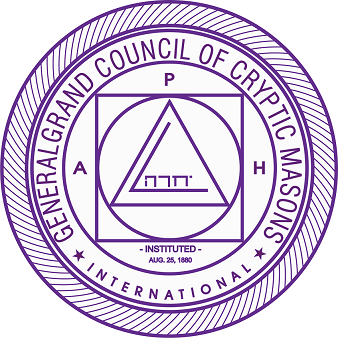 During the May 2022 Fire Side Chat, Most Puissant Companion Dick Eppler spoke on The Origins of Cryptic Masonry. The presentation covered the sources of the Cryptic Degrees, and how the Rite was put together.  This video is now available at the link below:

The Epplers relocated to Cheshire, CT in 1984, where Dick was employed by Olin Corp. He now runs his consulting business Eppler Associates.

After serving several years as cast director of the Order Knight of York for Connecticut York Rite College #17, he joined the line and served as Governor in 1999. He received the York Rite Sovereign College Service Award in 1994, and the Order of the Purple Cross in 1996. He was appointed Deputy Gtand Governor for CT in 2001, serving until 2006, Grand Governor for CT 2006-2010, and as Grand Herald in 2010-2011.

In the Scottish Rite Dick is a member of the Valley of New Haven and Lafayette Consistory. He served as Thrice Potent Master of thec E.G. Storer Lodge of Perfection in 1990, as Most Wie Master of New Haven Chapter of Rose Croix I 1996.He received ther Arthur M. Brown 33 Meritorious Service Award in 1997.

He is a member of National Sojourners, where he has been President of both Baltimore Chapter #7 and Hartford Chapter #56, and Lafayette Camo Heroes of 76. He is Grand Tall Cedar if Laurel Forest #130, Tall Cedars of Lebanon. He has been Worthy Master of both Nuvum Eboracum Chapel and Nutmeg Chapel of the Order of St. Thomas of Acon. Very Eminent Preceptor of Emmanuel Tabernacle, Holy Royal Arch Knight Templar Priests, Excellent Chief of Mohawk Council, Knight Masons, and Sovereign Master of Nathan Hale Council #78, Allied Masonic Degrees.