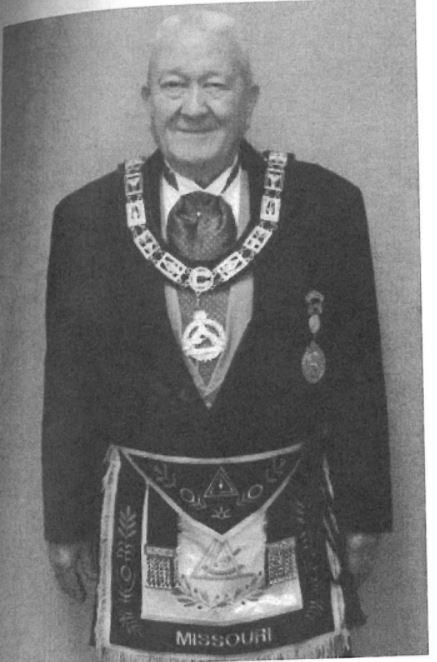 Companions all, it is with much sadness that we report the death of Most Illustrious Companion Albert H. “Sonny” Miller, Past Grand Master of the Grand Council of Cryptic Masons of the State of Missouri, 2006-2007. Sonny passed away on February 26, 2021, and is under the care of Dardenne Baptist Church.

As a tribute of respect and by order this day of M.:.I.:.C.:. Wayne B. Fryer, Grand Master, all Missouri Councils of Royal and Select Masters will present this communication along with the attached Memoriam at their next stated assembly. Councils will drape their charters for a period of 30 days from that meeting for our departed Companion and duly record this action in the minutes.

Albert Hugh “Sonny” Miller was born July 8, 1934, in Sainte Genevieve Country near Coffman, Missouri. He is the eldest son of the late Albert Benedict Miller and the late Sofia Blanche Bloom Miller. He received his education in the Coffman grade school and from the Sante Genevieve public high school in 1951. Also, he graduated from the Saint Charles Police Academy; receiving 160 hours of police instruction. He was married to Betty Jane Harter in 1955, has four married children: Janie, Carl, Carol, and Randy, fifteen grandchildren, and seven great-grandchildren. He retired from Service American Vending Company in 1996 after working as a route salesman for thirty-five years. He served as a police reservist for eighteen years in the cities of Wentzville and O’Fallon, Missouri, and Saint Charles County, Missouri.

Miller received his Masonic degrees in Saint Francois Lodge No. 234 at Libertyville, Missouri being initiated March 11, 1958, passed April 10, 1958, and raised May 9, 1958. After turning in his proficiency in June, he moved to Wentzville, Missouri permanently, transferring his membership in 1959 and serving as Worshipful Master of Wentzville Lodge No. 46 in 1962. During his term, twenty-one men were raised that year. After moving to Wentzville, he was appointed Chairman of the Advisory Board of Daniel Boone Chapter, Order of Demolay, and served in that capacity for close to ten years. He received the Honorary Legion of Honor in 1977. He also served as Associate Guardian of Job’s Daughters Bethel No. 45. He is a past Worthy Patron of Order of the Eastern Star Chapter No. 37 and a member of the Sword of Bunker Hill. Miller served his community of Wentzville by serving on the Board of Education for four years for the Wentzville R-IV school district and also worked with the little league of softball and baseball for ten years as coach, manager, and umpire. He also worked with the Boy Scouts of America as Cub Master, Troop Committee Chair, and Unit Commissioner. He served on the board of the Performing Arts Association of Saint Charles County.

Miller is proficient in his Masonic work, receiving all five cards from the Grand Lodge and the Grand Lodge degree ritual award, all thirteen cards from the Grand Council, and the card in Opening and Closing from the Grand Chapter. He received the Scottish Rite degrees in the Oscar Jost spring reunion class, Valley of Saint Louis in 1962, the K.C.C.H in 1979, served as Commander of the Council of Kadosh in 1983 and was director of the work for the council for two years. He served as a counselor for the New Valley Scottish Rite club for five years, formed a Rose Croix funeral team west and north of Wentzville, performing twelve funerals in ten months. He also served as chaplain for the Daniel Boone Shrine club for four years

Miller was appointed District Deputy Grand Lecturer for the 30th district of the Grand Lodge of Ancient, Free, and Accepted Masons of the State of Missouri and served four years from 1968-1972, and again as D.D.G.L. for the 37th district in 2005 and 2006. He holds a certificate of proficiency No. 010 for candidate’s lectures.

Miller is also a member of the Olin S. McDaniel No. 259 A.M.D. and the Bruce Harmon Hunt No. 162 York Rite College and Greater Saint Louis York Rite Council Club. He also served as the Regional Deputy Grand Master and Region Deputy Grand Lecturer of Region 6, receiving the Lewis & Clark award in 1993 and the Cryptic Mason of the Year award in 2000. He was appointed to the advancing Grand Council line by MIC Leroy D. Unruh in 2001. He served as Grand Master of the Grand Council in 2006-2007.

Miller is a volunteer at the Mineral Area Regional Medical Center in Farmington, Missouri, and president of the hospital auxiliary there. He is a member of Pine Log Baptist Church having served as Sunday School Director and deacon. He is also Chairman of three cemetery associations near Coffman and is the chaplain for UEL Chapter No. 129, Royal Arch Masons, and Bonne Terre Council No. 43. Miller is also a member of the KYCH club in Farmington.