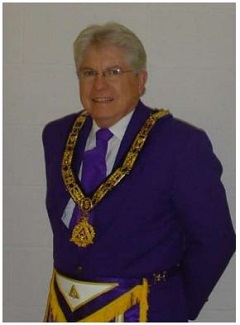 Companion Jack C. Wade was born May 12, 1944 to William H. and Laura M. Wade in Warrior, Alabama. When he was age six, his father moved the family to West Virginia then to Odessa, Texas when he was age ten. He graduated from Permian High School and attended Odessa Junior College where he studied electronics. He served in the U.S. Army and married Brenda J. Taylor during that time. MIC Wade moved from Texas to Birmingham in 1971 and attended the University of Alabama and was employed by Southern Railway after graduation. In January 2008, he retired from Norfolk Southern Railway after more than thirty years of service.

MIC Wade served as the Grand Representative to the Grand Chapter of Maine, Grand Council of Portugal, and the Grand Commandery of Michigan. He received the Cryptic Mason of the Year Award in 2002 and the York Rite Sovereign College’s Order of the Purple Cross in 2008.