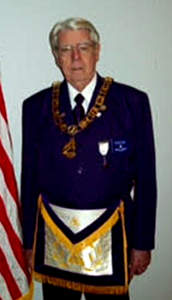 It is with great sympathy and sadness that we must report the passing of Most Illustrious Companion Marvin L. Chamberlin, Past Most Illustrious Grand Master of the Grand Council of Cryptic Masons of Oklahoma on Wednesday, July 6, 2022, at the age of 90.

M.I.C. Chamberlin served as Most Illustrious Grand Master of the Grand Council of Cryptic Masons of Oklahoma from 2014-2015.

Born September 13, 1931 in Polk County, Missouri, he was the last of three children born of Glenn Lee Chamberlin and Eula Adaline Cox Chamberlin. Marvin received Jesus as his personal Lord and Savior on July 4, 1945.

On June 29, 1951, he was married to Wanda Beatty Chamberlin of Oxnard, California. They were married for 68 years until her passing on February 7, 2020. He was preceded in death by his wife and parents.

His early years were spent in Missouri.

The family moved to Santa Paula, California where he graduated from High School. He attended California Baptist College (now University) in Riverside, California, graduating with a Bachelor of Arts Degree in 1955. He was ordained a Baptist Minister in November 1955 and served several churches in California. He received a Master of Divinity Degree from Golden Gate Baptist Theological Seminary in 1961 and later the Doctor of Ministry Degree from San Francisco Theological Seminary in 1987.

From 1961 until his retirement in 1982, Marvin served as a United States Navy Chaplain under the endorsement of the Home Missions Board of the Southern Baptist Convention.

The family moved 13 times to duty stations around the world including Japan and the Philippines as well as several stateside stations ranging from California to Mississippi. Marvin was a veteran of the Vietnam War serving both in country and at sea.

After retiring from the Navy, Marvin became the pastor of Parkview Baptist Church in Port Hueneme, California where he served for seven years before serving as a field representative for California Baptist University Foundation, Riverside, California.

In 1996, Marvin and Wanda moved, for the 22nd and final time, to Eufaula, Oklahoma where they became active members of the North Fork Baptist Church.
Marvin was active in Freemasonry as a 32nd degree Mason. He served at both the local lodge and state lodge levels and was a member in good standing with the Ancient Free and Accepted Masons Eufaula Lodge #1. Other Masonic affiliations include; Valley of McAlester Scottish Rite where in 2009 was elevated to a Knight Commander Court of Honor, Oklahoma Past Commanders Association Knights Templar, Knight of the York Cross of Honor, Oklahoma Priory #9, Order of High Priesthood Grand Royal Arch Masons of Oklahoma, the Council of Thrice Illustrious Masters of Oklahoma, Order of the Sword and Trowel, the York Rite College #75 of Oklahoma, the Allied Masonic Degrees and the Knights of St. Andrew.

In addition to his love of and dedication to his church and to Freemasonry, Marvin and Wanda loved to hit the road with their travel trailer. He and Wanda camped in every state in the continental U.S. as well as Canada.

Other interests and hobbies included sailing, involvement with the Orphan Train Heritage Society of America, and the Sons of the American Revolution.

Memorial donations may be made to North Fork Baptist Church or the Scottish Rite Hospital.

Arrangements are under the direction Hunn, Black and Merritt Funeral Home in Eufaula.

Full military honors will be rendered.