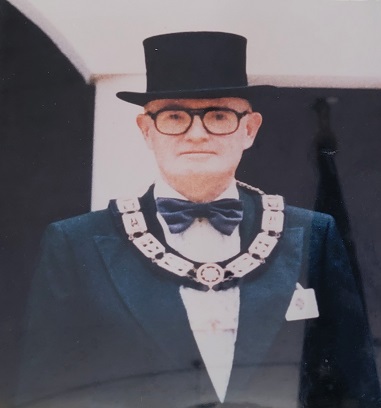 Robert J. Johnston known as “Bob” to all his Masonic Brothers, was a 74-year member of Ellensburg Lodge No. 39 and will be remembered as the brother who contributed the most to Freemasonry in Ellensburg.  He was raised a Master Mason on May 5th, 1948.  His service to his country as a Marine in WWII prevented him from joining earlier, but he told us he had wanted to.  He served as Worshipful Master of the Lodge in 1965 and as Chaplain for more years than anyone can remember.  His dedication to his lodge and to freemasonry might best be explained, in masonic terms, in this:  He raised every Master Mason in the Ellensburg lodge for over 50 years.  Bob certainly served his lodge well and earned the Grand Master’s Achievement Award in 2006.

He was also very active in the York Rite of Freemasonry.  Bob was Grand Illustrious Master of Cryptic Masons of Washington 1977.  Bob was also Commander of Temple Commandery #5 in 1966 and served as Grand Commander in the State Washington in 1986.  For the Royal Arch Chapter and Immaculate Tabernacle, Holy Royal Arch Knights Templar Priests, Bob was the Secretary or Recorder for over 50 years.

He was active in the Scottish Rite, Shrine, and the Order of the Eastern Star as well and served as Worthy Patron in Grace Chapter, in Ellensburg many times.
Bob worked tirelessly to maintain the Temple Building, in fact the lodge eventually passed a resolution that he could no longer climb a ladder or go on the roof when he was 93 years old.  This resolution was respected by Bob, but ultimately ignored when he saw work that needed to be done.

Bob knew everything related to Freemasonry, from how the building worked, to the rituals, obligations, and lectures for 20 or so degrees that he helped confer, to the main message of the craft which is to be a good mason and true.  He will be sorely missed by his brethren.