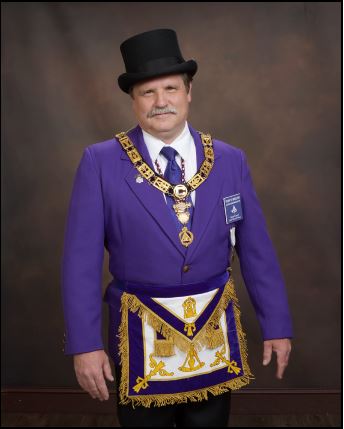 Rodney Dean Middleton was born in Newport Beach, California in 1961 and is the oldest of four children. After a few short years, his family relocated to Kansas, finally settling in Mound Valley where he grew up. Rodney’s father worked for the Kansas State Extension office and farmed at his family homestead in a neighboring town. After graduating from Labette County High School in Altamont, Kansas in 1979, Rodney joined the U.S. Air Force in 1980, serving 21 years and retiring in 2001. During his time in the Air
Force, he obtained an associate degree in Science from Western Oklahoma State College in Altus, Oklahoma, as well as an associate degree in Airframe Repair Technology from the Community College of the Air Force. Rodney joined the local Masonic Lodge, Altus Lodge #62, and became a Master Mason in 1990.

During his time at Altus, Rodney was appointed Sr. Deacon. However, because of a transfer to Hill Air Force Base in Utah, he was required to move his membership to Gateway Lodge #29 in Clearfield, Utah from 1994 to 2001, where he was eventually elected Sr. Warden. At this time, Rodney joined the local Chapter, Council, and Commandery (Ogden Chapter #2, Ogden Council #3 and Ogden El Monte #2 Commandery).

Rodney was next transferred to Kunsan Air Force Base in Korea, but after returning from his assignment, he finished his military career at McConnell Air Force Base and retired in 2001. Shortly thereafter, Rodney relocated to Altamont, Kansas with his son where he joined Parsons Lodge #117 and Altamont Lodge #69, going through the chairs to eventually become Worshipful Master at both lodges in 2005 and 2006.

Currently Rodney is serving as the secretary of Altamont Lodge, an office he has held for the past ten years. In addition to this service, he was appointed District Deputy Grand Master in 2014 and 2015. Rodney joined Parsons Chapter #39 in 2001, becoming High Priest in 2004, 2009, and in 2017. He has also been the District Deputy Grand High Priest #2 forthe past five years. In 2013, he was appointed as Illustrious Grand Conductor of the Council, and in 2017 Rodney was elected Most Illustrious Grand Master.

Some other Masonic degrees and affiliations of Rodney’s include: