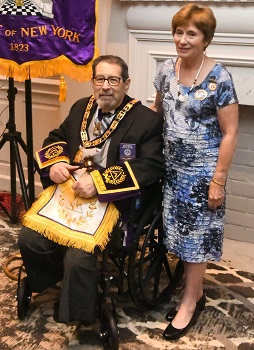 Stephen A. Rubinstein was born in Fitchburg Mass, on June 27, 1945. He was a graduate of Fitchburg High School and that of Franklin and Marshall College with a Bachelor’s Degree in History. Stephen before his retirement worked in several industries as an administrator and office manager and was an adjunct professor of management at New York University. Stephen proudly served his country in the U.S. Army as a Chaplain’s Assistant during the Vietnam War.

Stephen began his Masonic career in Charles W. Moore Lodge of A. F. & A. M. in Massachusetts. He was Initiated on September 1966, Raised to the Sublime Degree of Master Mason that December and served in the East as Master of the Lodge. He joined New York Masonry in 1985 when he affiliated with Goldenrule Clermont McKinley Lodge #486. Joining four other Lodges in New York, he settled into Wappingers Lodge #671 in November of 2013. He served his District as District Deputy Grand Master.

He continued his York Rite travels joining Zerubbabel Chapter #147, Royal Arch Masons and was greeted in North Shore Council #88, Cryptic Masons in August 1999. He served his Council as Illustrious Master in 2014 to 2015.

Stephen was elected into the Grand Council of Cryptic Masons as Grand Steward in August of 2015. He served our Grand Council with distinction as he progressed along the Grand Line and was Elected Most Illustrious Grand Master in August of 2022. He was an active member of the General Grand Council Cryptic Masons International as a member of the Budget Committee and a representative in Massachusetts. As representative to Massachusetts, he introduced the First Responder Award to 21 Master Masons. Additionally, he served as an instructor for the York Rite Leadership Program for many years.

Most Illustrious Grand Master Stephen Rubinstein at the age of 77 passed away in Office to that Celestial Lodge above on November 19, 2022. He is survived by his Lady Nancy Maldari and loving family members.

Grand Master Rubinstein will be greatly missed by the Brethren in all his Masonic Organizations.

“Well done, good and faithful servant, enter Thou into the joy of thy Lord!”

Stephen was born in Fitchburg, the son of Philip and Dorothy (Fergenson) Rubinstein. Following graduation from Fitchburg High School, Stephen proudly served his country in the U.S. Army as a Chaplain’s Assistant during the Vietnam War. Prior to his military service, he graduated from Franklin and Marshall College with a Bachelor’s Degree in History and earned his M.B.A. from the University of New Hampshire.

He lived in Queens, NY for many years, eventually returning to Massachusetts and settling in the town of Stow with his devoted partner. Before his retirement, Stephen worked in several industries as an administrator and office manager and was an adjunct professor of management at New York University for many years. Stephen served for several years on the School Committee for the Nashoba School District and was also involved with the Tri-Town High School Building Committee.

Stephen lived his life “On the Level” and was most proud of his Masonic work. A Past Master of Charles W. Moore Lodge of A. F. & A. M., he was also a Past District Deputy Grand Master of New York, also serving as Most Illustrious Grand Master for the Grand Council of Cryptic Masons of New York.

Stephen will be lovingly missed and remembered by his beloved partner, Nancy Maldari of Stow; his sister, Lisa Scholl and her husband, Joseph of Waltham; his brother, Dr. Neal Rubinstein and his wife, Dr. Isabelle Arndt of Chester Springs, PA; his two children and four grandchildren, four nieces and nephews; and his dear friends and Masonic brethren.

Funeral Services will be held on Sunday, November 27 at 11:00 AM at Miles Funeral Home, 1158 Main Street, Holden. A Masonic ritual will precede the service. Interment will follow at Agudas Achim Cemetery, 320 Rollstone Road in Fitchburg. Memorial Observance will be announced at the service.

In lieu of flowers, Memorial Contributions may be made to the American Heart Association or the charity of your choice.