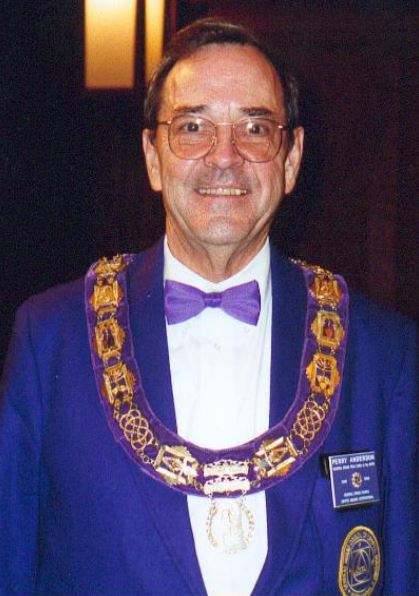 Most Puissant Companion Perry B. Anderson
Past General Grand Master, 2002-2005

As many of you know, Mrs. Dee Anderson of Pierre, SD ascended into heaven late last year. And now, our Perry has been summoned to join her in the mansions prepared for them. Perry Passed on Easter Sunday, April 17.

Most Puissant Perry served as South Dakota Grand Commander in 1991, Most Illustrious Grand Master in 1984 and Grand High Priest in 1983. He served during the Cryptic Mason Triennium of 2002-2005 as leader of the General Grand Council presiding over the Session in Rapid City, South Dakota.

A Prayer Service and Masonic Service will take place in Pierre, SD on Thursday, April 21 at 6:00 p.m. Funeral services/Celebration of LIfe will be held in Pierre on Friday, April 22 at 10:00 a.m. He will be Inurned at the National Cemetery in Sturgis on Friday at 1:30 p.m. MDT. The services will be Live-streamed. If you are able, go to the Feigum webpage.

Condolences may be sent to the family via the funeral home.

Perry Bernel Anderson, the fourth child of five, was born on August 30, 1929 to Bonnie (Vinger) and Perry Lee Anderson in Emmetsburg, Iowa. His father died in 1935, so he started working during the depression as soon as he could walk and talk. He grew up in Rippey, Iowa.

Perry enlisted in the Army when he was 17 at the very end of WWII and was stationed in Panama. When he was a teenager, Perry started working with his Uncle in a grocery store in Igloo, South Dakota. He married the love of his life, Dolores (Dee) Zink in 1951. They moved to Pierre in 1959 and Perry continued to work with his Uncle Bill Anderson at the Piggly Wiggly grocery store. They moved across the street and opened Anderson’s Clothing Store in 1967, which thrived until 2015 when Perry retired at the age of 87.

Perry enjoyed softball when he was younger, loved traveling and camping, and was an avid gardener and a Master Gardner.

Perry’s passion was all of the Masonic Organizations. He was Master of his Lodge, Worthy Patron of the Order of Eastern Star and eventually travelled the world as Most Puissant General Grand Master General Grand Council, Cryptic Masons International, and numerous other titles.

Perry is survived by his son Greg Anderson (Deb), his daughter LeAnn Bruno, his grandchildren: Claire Anderson, Ian (Sally) Anderson, Anthony (Siobhan) Bruno and Nicholas (Michelle) Bruno, and his sister Bonnie Morrow. Perry was preceded in death by Dolores (2021), his wife of 70 years, and his sons Bruce (1952) and Steve (2012).