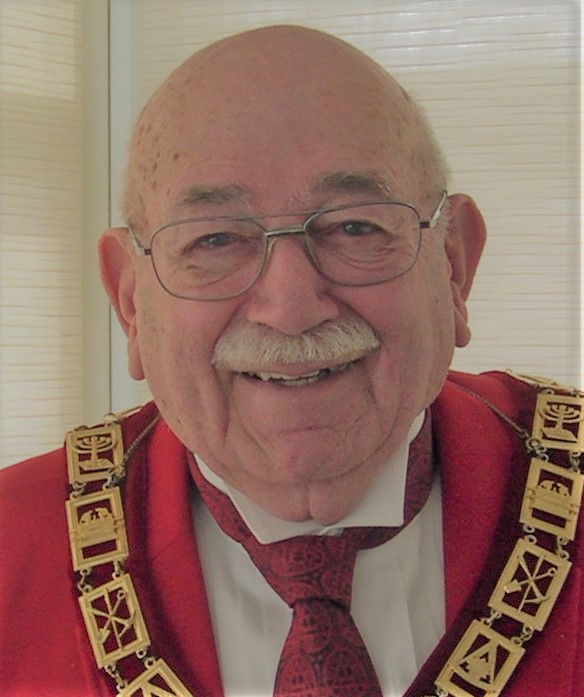 When he joined the Navy at 17 his only duty station was at Kamisaya, Japan. He enjoyed the Japanese People. He was separated October 1960 as a Petty Officer 2nd Class.

He took a temporary job at a Bank in 1960 and 17 years later figured out what he wanted to be when he grew up and joined the Bonneville County Sheriffs Office and served until December 31, 1999. It was a good choice.

While working at the bank he married his Secretary, Rosalyn in 1966. They have three daughters, Kim, Jill and Melanie. Another good choice.

As he was nearing retirement he realized that he would lose his social contacts and started to consider what to do. He had heard of the Masons and a question to one gave him some answers and a petition. Again, another good choice.

He was entered, passed and raised in spring of 1999. He served as Master in 2007 and 2008. He served as DDGM for two years. MWGM Skip Owen appointed him to the Grand Line as Junior Steward, now serving as Senior Grand Warden.

He joined the York Rite Bodies of Idaho Falls and served as High Priest and Illustrious Master. Received the Knight Templar Cross of Honor, and Knight Commander of the Temple, and served as Eminent Commander.

He belongs to the three Idaho York Rite chair degrees.

He is a past Sovereign Master of Red Cross of Constantine, Past Governor of York Rite College, Past Sovereign AMD, Member of KYCH. Member HRAKTP, Member Societas Rosicruciana.

He is a 33rd Degree Mason in Scottish Rite.