Submitted by Illustrious Companion David Sandretto, Grand Conductor of the Council of Washington 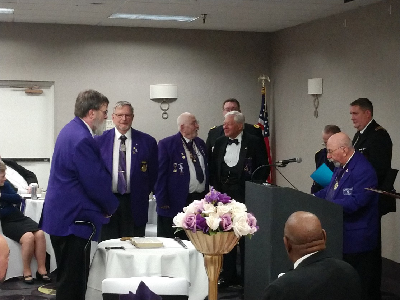 On May 6th, 2022, at the Washington Grand Sessions held at the Tacoma La Quinta Inn and Suite, in a banquet room set for a fellow ship dinner. Companions were eating and exchanging pleasantries and the usual small talk with fraternity in their hearts, the betterment of the craft on their minds, and hope future. When White was called up to the podium and invested with the Order of the Secret Vault. White a mason for just over 15 years has been involved with just about every masonic organization in his local jurisdiction. White a Southern Gentleman hailing for North Carolina, who has been a firefighter and Emergency Medical Technician as well as various other jobs has always sought out service to others. White’s sense of humor always keeps the Companions smiling as he tends to lighten the heavy subjects with a little joke now and again. 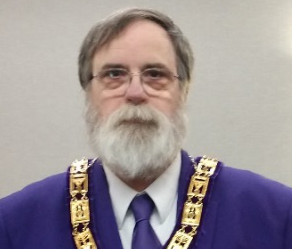 Who is Jay White the Mason

Jay has served as head of all three York rite bodies in the Tri-Cities, has served the Deputy to Grand High Priest for 3 years in District #7, and has served for three years as the president of the Royal Arch Children’s Heart foundation and was a trustee for several years before his term as president. In addition to his duties with the Heart Foundation, he was the Vice President of York Rite WA, LLC, and a member of the Knights Templar Eye Foundation Grand Master’s Club.
Jay is a member of the Kamiakin York Rite College #28 and serves as the body’s Governor. He also serves as Treasurer for Clontarf Council #69 of Knight Masons
He is currently serving as the Grand Generalissimo of the Grand Commandery of Washington, Grand Master of Ceremonies of the Grand Council of Washington and serves on multiple committees related to those positions.

He had very successful terms as the High Priest of Pasco 33, Illustrious Master of Zadok Council #23, and Eminent Commander of Pasco #21. He increased their visibility in the local lodges, increased membership in York Rite and oversaw the conducting of the degrees of initiation and advancement for all three bodies. For the last year Jay has taken on the role of recorder for the three Tri-City York Rite bodies and has improved each with his knowledge and insight. Jay was the host of the regular Zoom meetings held over the last two years that fostered communications between the members during the Covid pandemic.

Jay for some time has been a teacher/instructor of the Craft. He has held regular instruction classes that have covered degree work for initiates, practice for degree work and individual coaching for those learning lectures and installing parts. He has been instrumental in funding and coordinating on-line learning and instructional speakers through Zoom making it available to all that want to attend.

Jay has been member of several lodges, Benton 277, Grandview 191, and Richland 283. He served in the line in two of those lodges. In Benton 277 he has been the cornerstone in keeping the lodge active. He has served as Master of the Lodge twice and has been its secretary for the last three years. He got this lodge involved in community events like Benton City Daze, the community car show, Fall Festival, and Christmas Bazar.

During his terms the Benton Lodge has sponsored a banner with the lodge name on it on the Little League baseball field fence, conducted food drives during the holidays and expanded the “Bikes for Books” program to include the local library for a summer reading program. His sense of enthusiasm and brotherhood brings brothers to lodge. He instituted a monthly potluck dinner for local Brothers, their families and friends on the 4th Sunday and a lite dinner at lodge meetings, many times not recouping the total cost of the meals or snacks. He embodies the meanings of Charity and Brotherly love and reflects that light back to the world.