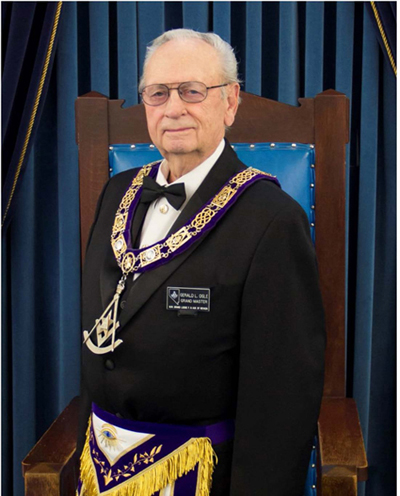 M.W. Gerald L. “Jerry” Ogle, the 145th Grand Master of the State of Nevada, was born on October 17, 1935 in Wenatchee, Washington, to Millard M. and Lillian Mae Ogle.  He attended Elementary, Junior and Senior High School in Seattle, WA.  Companion Ogle graduated from Bainbridge Island High School while on active duty in the Marine Corps.  He was married to Renate and they have 4 children.  Our Companion joined the Marine Corps on September 12, 1953 and retired on December 1, 1984, serving with distinction and honor for 31 years.  He retired with the rank of Sergeant Major.

While in the Marines, he served in all three Marine Corps Divisions as an infantryman.  Companion Ogle proudly served two tours in Vietnam.  Some of the special duties he was assigned to were: Marine Drill Instructor, two years as a sea-going Marine on the ship USS Oklahoma City 5, stationed in Japan, assigned Embassy Duty in Bonn, Germany, Instructor with the Marine Air and Ground Detachment 46, served on a reserve Helicopter Unit on Whidbey Island, WA, and his last duty station was in Kansas City, MO at the Marine Corps Finance Center.

Upon retirement, he moved to Henderson, NV and became an instructor at Basic High School, teaching Marine Corps Junior Reserve Cadets.  Many of his Cadets have joined Masonry and are active in different Lodges.

M.W. Gerald L. Ogle was elected and served as Grand Master of the State of Nevada on November 15, 2016.  It was truly a labor of love serving as Grand Master.  He enjoyed most of all, the friendships, fellowship and Brotherly Love that he received in each and every Lodge that he visited.

Right Puissant Jerry was a staunch supporter of the Cryptic Masons Medical Research Foundation and served as a Board of Trustees Member for nine years.  He organized several activities for the Board when the board met in Las Vegas.  One of the most successful was a two Council Table Council with Ladies at Las Vegas Lodge.  The meeting included a meal, presentations by Dr. Keith March, questions from the participants (mostly from the ladies), and an auction conducted by Pam Rogers.  Over $1,000.00 was raised for the Foundation.  He was as devoted to this Foundation and its efforts as he was to the Marine Corps.

Brother Jerry laid down the working tools of life and joined our celestial Fraternity above on February 25, 2019.

Freemasonry and the Nevada Masons will sorely miss him.