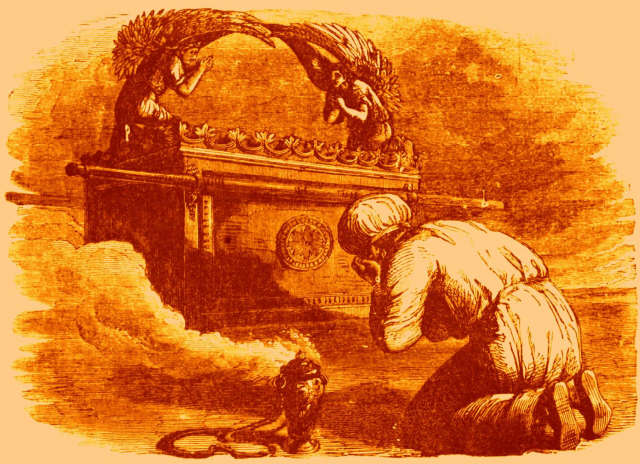 Ark of the Covenant

It is a very old story that provides the background of the traditional story. Derived from the Ecclesiastical history of Philastorguis in A.D.364, written in Greek. Epitomized by Photeus, Patriarch of Constantinople 853, translated by Edward Walford, Oxford. Photeus, a Greek scholar and theological writer of the Byzantine period. Died 891.

When Julian (Roman Emperor 331-363) bade the city of Jerusalem to be rebuilt in order to refute openly the predictions of our Lord concerning it, he brought about exactly the opposite of what he intended.

For his work was checked by many other prodigies from heaven; and especially, during the preparation of the foundations, one of the stones which was place at the lower part of the base, suddenly started from its place and opened the door of a certain cave hollower out in the rock. Owing to its depth, it was difficult to see what was within the cave.: so, persons were appointed to investigate the matter, who, being anxious to find out the truth, let down one of their workmen by means of a rope. On being lowered down he found stagnant water reaching up to his knees; and, having gone around the place and felt the walls on every side, he found the cave to be a perfect square. Then, in his return, as he stood near about the middle, he struck his foot against a column which stood rising slightly above the water. As soon as he touched this pillar, he found lying upon it a book wrapped up in a very fine and thin linen cloth; and as soon as he had lifted it up just as he had found it, he gave a signal to his companions to draw him up again. As soon as he regained the light, he showed them the book, which struck them all with astonishment, especially because it appeared so new and fresh, considering the place where it had been found. This book, which appeared such a mighty prodigy in the eyes of both heathens and Jews, as soon as it was opened shows the following words in large letters: “IN THE BEGINNING WAS THE WORD, AND THE WORD WAS WITH God, and the word was God,” in fact, the volume contained the entire gospel which had been declared by the Devine tongue of the (beloved) disciple and the Virgin. Moreover, this miracle, together with other signs which were then shown from heaven, most clearly showed that “the word of the Lord would never go forth void,” which had foretold that the devastation of the temple should be perpetual. For the book declared Him who had uttered those words long before, to be God and the Creator of the universe; and it was a very clear proof that “their labor was but lost that built,” seeing that the immutable degree of the lord had condemned the temple to eternal desolation.

Julian referred to in the first line of the legend is the Roman Emperor Julian 331-363, surnamed the Apostate, who succeeded his uncle Constantine the Great in 361 and, in his tolerance of religion, gave the Jews permission to rebuild the Temple in Jerusalem, his motive being to annoy the Christians, with whom he had lost sympathy. From this it might appear that the actual subterranean chambers of King Solomon’s Temple were disturbed not by Zerubbabel, but by Julian, who undertook to rebuild the Temple of Herod (destroyed by Titus) in order to falsify the prophecy (Matthew xxiv,2) that there should not remain one stone upon another: “Verily I say unto you, there shall not be left here one stone upon another.” But the effect of his reopening the subterranean chambers which had been closed for centuries was that, according to one version of the fable, explosions of accumulated gas killed his workmen and still further disturbed the masonry, so that, so far from falsifying the prophecy, he, in fact, helped to fulfill it.

THE CALLISTUS VERSION OF THE LEGEND
VERSION 2

In this version an earthquake interrupts the work. (This version much abbreviated).

“The Jews having got together,” skilled men and material, cleaned the place and “provided spades made of silver” (at the publics charge). They cleared the ground “so that there was not a stone remaining upon a stone, according to the prophecy.” An earthquake the next day cast stones out of the foundation “so that many of the Jews were slain…The public building, also which were nearest the Temple were loosened, and falling down with great force, proved the sepulchers of those that were in them…. The earthquake was scarce over, but those that remained fell upon the work again, etc. but when the second time they attempted it, some fire violently issued out of the foundations….and consumed more than before… moreover, the fire which came down from heaven consumed to ash the hammers, graving tools, saws, hatchets, axes and all other instruments which workmen had brought for their service, continued a whole day together, etc. when Cyril, who was at the time Bishop of Jerusalem, saw these thing; he considered in his mind the word of the Prophet DANIEL, which Christ also set his seal in the Holy Ghost; he told them all, that now was the time that the Oracle of our savior had its accomplishment; which said , that a stone should not remain upon a stone in this Temple. And when he had spoken this, a sore earthquake assailed the foundations, and cast out all the remaining stones, and dispersed them. Upon this there arose a fearful storm” Fire destroyed the company of workers, the narrative continues:

When the foundations were a laying…. There was a stone amongst the rest, to which the bottom of the foundation was fastened, that slipped from its place and is covered the mouth of a cave which had been cut in the rock…. the overseers…. Tied a long rope to one of the laborer’s and let him down…. Searching every part of the hollow place, he found it to be four squares, so far as he could conjecture by feeling.

The discovery follows closely the words of the first account. It should be understood that the details and versions vary one from the other, they do not closely observe any precise order of events and that historical names are used with little or no regard or chronological sequence.