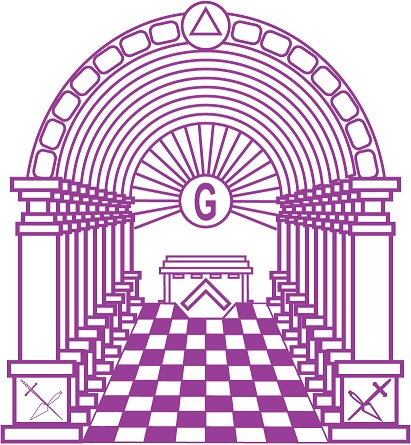 Legends about a crypt or vault under the Temple mount are varied. The Talmudic version, dating to around 100 AD, describes a Vertical crypt of nine arches one above the other, and are attributed to Enoch. Another legend told by Philostorgius describes a horizontal crypt consisting of a large cavern reached by a narrow passage. Both legends appear in some of the Old Charges. These legends were expanded and adapted for Masonic degrees by the Chevalier Michael Ramsey and his friends in France and Germany during the eighteenth century (1730-1750).

As we are reminded, the Cryptic degrees historically precede the Royal Arch; a peculiarity of the York Rite. This is a good thing because it causes the reflective Mason to be continually studying the sublime precepts and ceremonies of the Rite.

On September 2, 1810 Thomas Lowndes and fifteen other active Masons founded what they named “Columbian Grand Council No. 1, Royal Master Masons”. At this meeting is recorded the first known conferral of the Royal Master Degree.

It is not known where or how Thomas Lowndes acquired the Royal Master Degree. On the one hand, he had received several of the degrees of the Rite of Perfection in 1806 from Abraham Jacobs, a Grand Inspector of the Emperors of the East and West, which could have included the Royal Master or a related degree.

Another huge issue was the dispute between Joseph Cerneau and J.J.J. Gourgas over leadership of the Scottish Rite was in full bloom at this time, and the aforementioned sixteen Brothers included adherents of both sides.

Some scholars are even of the opinion that Lowndes created the degree a few years before 1810. At the very least he is recognized as the principal disseminator of the degree.

At the first meeting on September 2, 1810, the members elected their first officers, including Thomas Lowndes as “Thrice Illustrious Grand Royal Master”, an office he continued to hold until 1821. They also balloted on four candidates and then conferred the degree on them.

The degree of Royal Master remained the working degree of this Council from its founding until it joined in the formation of the Grand Council of Royal and Select Masters of New York in 1823.

On December 22, 1817, is recorded the first conferral of the Degree of Super Excellent Master, presided over by Thomas Lowndes. The degree, which has no relation to English degrees with a similar name, was probably written by Thomas Lowndes, and hence, is a product of America.

The Council gradually established itself as a functioning institution and by 1812 it developed Bylaws, and then a Constitution. For the most part, it kept regular minutes. However, there are occasional gaps, sometimes of more than a couple months. This is particularly important because, Jeremy Cross’s reception of the Royal Master Degree is not recorded anywhere, although Columbian Council is the most logical place.

Three theories about the Cryptic Degrees present themselves:

The Cryptic Rite began to emerge in the 18th Century and some contended that it was Scottish in origin, having a definite connection to the Stuart dynasty.

Primarily, the ritual had a hidden meaning associated with Bonnie Prince Charlie and his attempts to restore the crown to his family. For example, the “widow’s son” is tantamount to the heir of King Charles I who was executed; the “lost word” is related to be the “lost cause”; the “raising” of a Mason to reference the restoration of the Stuart Crown.

Further, the Stuart claim of origin theory relates that these “meanings” had to be kept secret for the very reason that they were “treason” in the eyes of the current monarchy. Some claim that this led to the need for “higher” degrees where the membership was carefully selected with the view to using the meeting places as planning sites and the doctrine of Stuart succession. This, it is claimed, is the reason for the legend of the “Secret Vault.”

It is certain that the Stuarts in exile used the Masonic higher degrees originating in France for their own purposes, but there is no evidence that they invented them.

Since Baltimore was an important city, both commercially and Masonically in the early 19th Century, it should be no surprise that one of the theories of the origins of Cryptic Masonry would be linked to Maryland.

In 1810, the Select Master Degree of Philip Eckel and Hezekiah Niles had already been conferred at a “Grand Council” in Baltimore. On a lecture tour to Baltimore around 1819-1820, Jeremy Cross, well known Masonic lecturer, received the degree from Eckel and spread it far and wide.

We now also know that Eckel received the Select Master Degree from a man named Henry Wilmans, a Past Master of a Lodge in Charleston, South Carolina (later to be founding Master of a Lodge in Baltimore). Wilmans it seems was a Scottish Rite Inspector General from Europe, and it was this power which permitted him to bestow the Select Master Degree on Eckel in Baltimore in March of 1792. This leads us to the:

Part of the early Rite of Perfection (25 Degrees) was the 5th Degree, termed the “Knight of the Eagle or Select Master.” Morin and his successors, Francken (Charleston, 1762 and Albany, New York 1767) and Moses Hayes of Boston (1768) were early proponents of not only the AASR but also of the “Cryptic Degrees” in Charleston, in 1802, they issued a manifesto outlining the degrees to which they claimed jurisdiction. It stated: “Most of the Inspectors are in possession of a number of detached degrees given in different parts of the world and which they generally communicate free of expense to those brethren who are high enough to understand them such as Select Mason of “27.” Such in brief is the Scottish Rite claim to the origin and control over the Cryptic degrees. It is supported by the fact that their members, some of whom were inspectors (e.g. Cohen, Jacobs, and Lowndes), actually did confer the degrees and in every instance the first record of conferring of either the Royal Master or the Select Master Degrees indicates that it was conferred by a member of the Rite of Perfection.”

So what happened that they are not so associated today? According to most scholars, it was because of a falling out within the ranks of the AASR, Northern Jurisdiction between J.J.J. Gourgas and Joseph Cerneau which saw that Lowndes, most influential over both York Rite and the Cryptic degrees, sided with Cerneau, and the Degrees were actually permanently exported into the York Rite, ca. 1818.

Van Doren, Richard- “An Encapsulated History of Cryptic Masonry in Europe and the United States”
Coil, Henry Wilson- “Coils masonic Encyclopedia”
Chase, Jackson H.- “The Textbook of Cryptic Masonry”
Mackey, Albert G.-“ Cryptic Masonry- A Manual of the Council or Monitorial Instructions in the Degrees of Royal and Select Master”