The Cherubim
Provided by the Oklahoma Chapter and Council Education E-Newsletter (https://okyorkrite.com/)
Extracted from the Articles and Papers Column in the January 2022 Issue 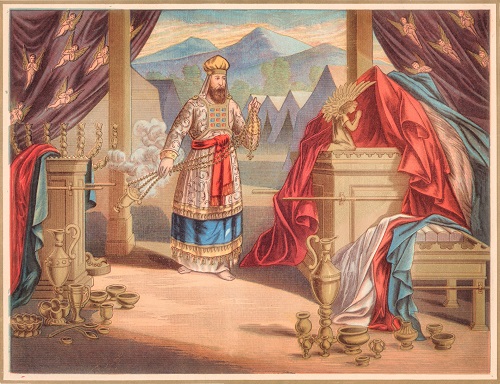 Ark of the Covenant
(Public Domain)

The mind of man is so constituted, as to be always thirsting for improvement; and though, in consequence of the abuse of our faculties, age comes prematurely upon many, there are others, who, like Caleb, feel not the dimness of vision, or the decrepitude of nature, but are, as it were, in an instant taken away in the midst of an evil world, and transplanted to another and a better soil.

He who pampers his body, and clouds his faculties by intemperance, denies himself the real pleasures of life; while he who “gives to God each moment as it flies,” is sensible of the aspirations of his soul for eternity; and so far from being discouraged by difficulties, recognises in those difficulties the truth of the statement, that here we “see but in part.”

In this present state of being our faculties are but in their infancy; “hereafter we shall know, even as we are known.” Humility, then, in approaching “the deep things” of God, is the best frame wherein to continue on this side the grave;—let us thank Him for what we know, and wait patiently the fruition of knowledge in an after state.

Something we know of God, and for that something we are indebted to His revelation; for we should not, and could not, have discovered it of ourselves. He created us; and the worm of earth who questions why this earth is not to be the scene of man’s matured state of existence, is guilty of rebellion against the King of Kings.

We are indebted to the law of Moses for several of those approaches to Deity which have comforted the hearts of many in the retirements of the closet. The symbol of the Cherubim is full of instruction, and the spurious symbol of the calves erected by Jeroboam, may show us what it really was.

It certainly was not an image of Deity, for it is described as under the God of Israel. In other places, God is said to dwell between the Cherubim, and as “riding upon a Cherub.”

As the Holy of Holies is explained by St. Paul as the figure of Heaven, we may do well to consider in what way the spirits in Heaven are employed; and of this we cannot entertain a doubt, as the heavenly chorus is known to us—“Thou (the Lamb) wast slain, and hast redeemed us to God by thy blood, out of every kindred, and tongue, and people, and nation.”

This ascription of praise strikes the mind with great force, when in proportion as we become acquainted with people hitherto unknown to us, we see human sacrifices observed (as by the Khoonds of Ghoomsur, near Ganjan), and are certified that, in some way or other, it is an acknowledged fact, go where you will, that mankind consider the shedding of blood to be efficacious in propitiating Deity.

I will not dwell upon this at any length, but refer the reader to the pious labours of Brother Oliver, and leave it to the candid judgment to say, whether or not an universal religion did or did not exist in patriarchal times, and whether or not the customs we are daily becoming acquainted with are not the imitations of what was once clear and pertinent.

A soldier does not question the wisdom of his general, but acts in obedience to his orders, and the soldier of the Great Captain of Salvation acts in like manner. His Sovereign has a right to place him where he will. The Jews ejected the Canaanites, not for their own righteousness, but because God willed it. The followers of‘ Mahomet have overrun the Seven Churches of Asia, not for their goodness, but because God willed it. In either case we cannot impugn the justice of the Great Architect, who we may be sure never punishes without reason, or unless the recipients of privileges have abused those privileges.

Here, we see in part; hereafter, we shall know all things.

Returning, then, from the apparent digression—but which is so far relevant as that it may lead us to see the appropriateness of the Cherubic Symbol to every nation under Heaven—we infer that the duty of beatific spirits in Heaven is analogous to the use for which the Cherubim were designed on earth.

Ascriptions of praise formed their anthem above; so in the Holy of Holies, or Figure of Heaven, the image of the Cherubim was intended to convey an idea to man of that divine attribute of Deity, mercy; and in what more appropriate way could it be pourtrayed than by describing on his footstool the great features of redemption? In condescension to our finite capacity, and to assist us in conceiving somewhat of Deity, we read of his repenting of his decrees, of his raising his arm, of his planting his foot, and so forth. In like manner, “The chariots of God are twenty thousand, even thousands of angels. In one of these, “a chariot of fire, and horses of fire,” was Elijah translated to Heaven; and in I Chronicles, xxviii. 18, we read of “the chariot of the Cherubim.”

What, then, were the Cherubim? They were not angels, as the 11th verse of chapters 5 and 7 of Revelations plainly indicates. They were “living creatures” (or figures of them), intended to show what is the nature of angels, who are the ministering spirits of God. The union of the man, the lion, the ox, and the eagle, shows their understanding, their power, their patient ministration, their swiftness in executing the command of the Most High. Such is the explanation given by our pious and talented Brother Oliver—a solution of a difficulty which must interest us, if we reflect on their continued agency to this hour, and the duty to be performed by them at the Great Assize. These “living creatures” were intended, also, to give an idea of the redemption of man from the effects of the Fall. When the Ark moved, Moses exclaimed, “Rise up, Jehovah!” whose presence “the glory” indicated, and the emblems described his attributes as redeeming man, the lord of the brute creation, by the incarnate Deity. The eagle, lion, and ox represented the noblest animals, and man their lord, all paying obeisanse to the Lord of All. The car moved of itself—“the Spirit was in the wheels”—“they turned not,” because in God is “no variableness or shadow of turning.”

The “living creatures” were in “the midst of the throne, and round about the throne;” they formed its basement or support, somewhat as in our times the achievements of the great are represented by supporters either on the sides or pediment of the shield.

Such are the glorious quarterings of the Masonic escutcheon, and its motto: “Resurgam.”

The full text of the December 31st, 1841 issue of “The Freemasons’ Quarterly Review” may be found at: