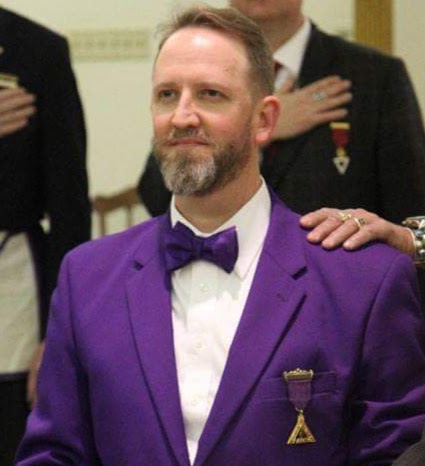 Lodges were anciently dedicated to King Solomon, but Freemasons of the present day dedicate theirs to St John the Baptist (24 Jun), and St. John the Evangelist (27 Dec, two eminent patrons of Masonry—Official Monitor and Ceremonies, GL of NM, 2007, p. 29. But why do many Freemasons celebrate Saints John?

In the New Testament, John the Baptist is the foreteller of Jesus. He is the preacher who baptized Jesus. Commonly in art, St. John the Baptist is depicted semi-nude in rough clothing, not much better than animal skins. Often, he is outside civilization, preaching in the wilderness.

John the Evangelist was one of the original twelve apostles and is thought to be the only one to have lived into old age and not be killed for his faith. However, he is commonly depicted as a young man in art. He is credited with the Book of Revelations, revealed to him on the Isle of Patmos. Conversely to the Baptist, St. John the Evangelist is depicted as wearing refined garments, literate, and knowing.

Together, the Saints John come to represent a continuum between the raw nature and refined spirituality of man, which is an extension of Masonry’s mantra of “making a good man better.” Two other symbols found in Masonry on par with this continuum are the rough and perfect ashlars. Every man who first enters the Craft lies somewhere on this line to perfection. Of course, we cannot be perfect because only He is perfect, but it ought not to keep us from striving to that endeavor.

How are the Saints John correlated with the calendar? For those questions, we refer to the New Testament where we see a chronological relationship between John the Baptist and Jesus in John 3:25-30:

25. Therefore there arose a discussion on the part of John’s disciples with a Jew about purification.
26. And they came to John and said to him, “Rabbi, He who was with you beyond the Jordan, to whom you have testified, behold, He is baptizing and all are coming to Him.”
27. John answered and said, “A man can receive nothing unless it has been given him from heaven.
28. “You yourselves are my witnesses that I said, `I am not the Christ,’ but, `I have been sent ahead of Him.’
29. “He who has the bride is the bridegroom; but the friend of the bridegroom, who stands and hears him, rejoices greatly because of the bridegroom’s voice. So this joy of mine has been made full.
30. “He must increase, but I must decrease.

The Saints John represent two extremes in the solar year between its longest and shortest days, which are 21–22 June and 21–22 December, respectively. Basically, the Saints John lie on either extreme of the earth’s orbit around the Sun.

Determining dates in the New Testament hinges on the Nativity of the Christ. So, how did the Mass of Christ (i.e., Christmas) came to be performed on 25 December? The answer may lie in early Christianity competing with other religions of the time.

Mithraism was widely practiced in the Roman Empire from about the 1st to the 4th century AD—ceremonial rooms have been excavated at Hadrian’s Wall between England and Scotland. Mithraism was a religion centered around the god Mithras, which originated from Persia (modern-day Iran). Mithras was a Persian creation god, as well as the god of light.

In Roman times, Mithras became associated with the sun god, Sol Invictus, the ‘Unconquerable Sun,’ whose birth was celebrated on 25 December along with the creation myth. The creation myth was central to Mithraism and is as follows:

The sun god sent his messenger, the raven, to Mithras and ordered him to sacrifice the primeval white bull. At the moment of its death, the bull became the moon, and Mithras’s cloak became the sky, stars, and planets. From the bull, also came the first ears of grain and all the other creatures on earth. This scene of sacrifice is called the Tauroctony and is represented as taking place in a cave, observed by Luna, the moon god, and Sol, the invincible Sun god, with whom he became associated in Roman times. Mithras is generally depicted emerging from a rock flanked by his two attendants, Cautes and Cautopates, and accompanied by a dog, raven, snake, and scorpion.A series of five frescos at the Mithraeum of ancient Capua (today Santa Maria Capua Vetere in Campania) depict what may be the rituals for some of the grades of initiation into the Cult of Mithras:

For the 1st Grade on Initiation into the Mithraic cult, the first fresco shows a blindfolded naked man; in the second he is also kneeling and his hands are bound behind him; in the third he is no longer blindfolded and is being crowned; in the fourth he is being restrained from rising; in the fifth he is lying on the ground as if dead (Manfred Clauss, The Roman Cult of Mithras, p.102-3. The frescos are CIMRM 187, 188, 191, 194 and 193.)

For the 2nd Grade on Initiation into the Mithraic cult, the initiate is again kneeling on one knee, with his hands tied behind him. The sword seems to be lying beside him on the ground, which may mean that he has successfully passed the first test. At any rate, he is no longer blindfolded. The assistant is again standing behind him, this time setting a crown on his head (Clauss, The Roman Cult of Mithras, p.130; V 191).

For the 3rd Grade on Initiation, the initiated stretched out on the ground as though he were dead. At his head and feet are the same two persons as before (Clauss, The Roman Cult of Mithras, p.130; V 193). Modern interpreters have seen here a kind of symbolic execution, taking it as a test, albeit not a life-threatening test, of courage. Interestingly, Mithraists preferred to give themselves a different name, based on a ritual gesture, the handshake: they called themselves by the Greek word syndexioi, those bound by the handshake.

The earliest written record of 25 December as being the birthday of Jesus is by Hippolytus, who was the most important Roman 3rd-century theologian (Commentary on Daniel, A.D 202–211, Book 4, 23.3):

“For the first advent of our Lord in the flesh, when he was born in Bethlehem, was December 25th, Wednesday [lit. Eight days before the Kalends of January], [Lit. the forth day], while Augustus was in his forty-second year. . . He suffered in the thirty-third year, March 25th [lit. Eight days before the Kalends of March], Friday [lit. The day of Preparation], the eighteenth year of Tiberius Cæsar, while Rufus and Roubellion were Consuls’—Schmidt, 2010, Hippolytus of Rome: Commentary on Daniel, p. 140.

In AD 350—Pope Julius I assigned 25 December to celebrate the Mass of Christ (i.e., Christmas).

In the Chronography of 354, also known as the “Calendar of 354,” was a 4th century illuminated manuscript, which was produced in 354 AD for a wealthy Roman Christian named Valentinus, which contains the earliest reference to the celebration of Christmas as a holiday or feast: “Eight days before the Kalends of January.” So now we have Christmas officially celebrated and marked on 25 December, from which we can determine other important events in the New Testament.

Why 24 June for the St. John the Baptist Day?

In Luke 1:13-15, Zacharias was visited by the angel Gabriel while he was in the temple of the Lord (New International Version (NIV):

13 But the angel said to him: “Do not be afraid, Zechariah; your prayer has been heard. Your wife Elizabeth will bear you a son, and you are to call him John. 14 He will be a joy and delight to you, and many will rejoice because of his birth, 15 for he will be great in the sight of the Lord. He is never to take wine or other fermented drink, and he will be filled with the Holy Spirit even before he is born.

24. After these days Elizabeth his wife became pregnant, and she kept herself in seclusion for five months, saying,
25. “This is the way the Lord has dealt with me in the days when He looked with favor upon me, to take away my disgrace among men.”
26. Now in the sixth month the angel Gabriel was sent from God to a city in Galilee called Nazareth,
27. to a virgin engaged to a man whose name was Joseph, of the descendants of David; and the virgin’s name was Mary.
31. “And behold, you will conceive in your womb and bear a son, and you shall name Him Jesus.
34. Mary said to the angel, “How can this be, since I am a virgin?”
35. The angel answered and said to her, “The Holy Spirit will come upon you, and the power of the Most High will overshadow you; and for that reason the holy Child shall be called the Son of God.
36. “And behold, even your relative Elizabeth has also conceived a son in her old age; and she who was called barren is now in her sixth month.

So how did we get 27 December to be St. John the Evangelist Day?

We’re unsure. We know that 27 December was established as St. John the Evangelist’s Day by the Middle Ages.

In this medieval calendar, the Feast of St. John the Evangelist (27 Dec) depicts a man holding a chalice with what looks like steam coming out of it.

St. John the Evangelist has the distinction of being the only one of the original twelve apostles to live to be an old man, rather than dying as a young martyr. According to one story, John was almost martyred, however, when someone tried to poison his wine, but he was saved because it was his habit to bless his wine before he drank it. John’s blessing didn’t just passively purify the wine—according to the story, the poison rose up magically from the chalice and formed into the shape of a serpent that then slithered off.

If you look closely at the image from the medieval calendar, you can see that December 28 is illustrated by two people impaled on a spear that’s being propped up by someone’s decapitated head. That’s because December 28th is The Feast of the Holy Innocents, commemorating the children massacred by Herod in his failed attempt to kill Christ.

Since 28 December is the Feast of the Holy Innocents, we deduce that 27 December is dedicated Saint John the Evangelist.

Masonic symbolism is a beautiful system of morality, veiled in allegory and illustrated by symbols—the Saints John are just one example symbolic representation of the “as above, so below.”