Albert G. Mackey on The Triple Triangle (or Pentalpha)
Provided by the Oklahoma Chapter and Council Education E-Newsletter (https://okyorkrite.com/)
Extracted from the Articles and Papers Column in the August 2022 Issue 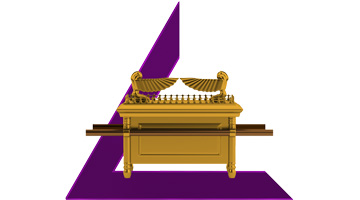 Broken Triangle and Ark of the Covenant

This article originally appeared under the title “What Do You Know About the Square, the Broken Square, and the Broken Triangle for the Cryptic Rite in Texas?”

Companions suffice it to say that the rituals of the Royal and Select Master degrees are somewhat different today from what they were in the formative years of the Cryptic Rite. Currently in the Texas version of the Royal Masters degree we use representations of the Square, the Broken Square and the Broken Triangle. Do you know where? Do you know how? To help answer these questions let’s examine some of the history of each symbol while observing the subsequent adoption of the Broken Triangle as a symbol of the Rite.

In two of the earliest prime sources of monitorial instructions and ritual for the Royal and Select Masters Degrees, those being Cross’ 1819 True Masonic Chart and MaCoy’s 1853 Masonic Manual, there is no mention of either the Broken Square or the Broken Triangle. However in Dr. A. G Mackey’s 1897 edition of Cryptic Masonry, a Manual of the Council, we find the first mention of the Broken Square:

“The square, containing four equal sides and four equal angles is the most perfect figure in geometry. Hence in Masonry it is the universally acknowledged symbol of perfection. And as that mystical union of our three Grand Masters who’s Wisdom, Strength, and Beauty adorned the temple, so the Broken Square, by the dismemberment of the perfect figure, is emblematic of that imperfection and loss which ensued upon the untimely death of one of the three.

Now compare this with the earlier published Hendricks 1892 Chapter and Council Manual for the Grand Royal Arch Chapter of Texas we find no mention of the Broken Square, but instead the Broken Equilateral Triangle:

“As the Equilateral Triangle is so applicable and peculiarly appropriate to the Royal Arch, symbolic of that perfect brotherly love so pre-eminently illustrated to the world in the mystical union of our three Ancient Grand Masters, whose wisdom, strength and beauty devised, erected and adorned the most magnificent of buildings, so is the broken Triangle equally appropriate to the Royal Masters Degree as symbolic of the imperfection, loss, and unhappy dissolution of that union by the untimely death (allegory) of one of the Illustrious three.”

It is not until we examine the 1900 ritual for the General Grand Council of Cryptic Masons, International, where in an optional apron lecture for the Select Master do we see a Cryptic Masons explanation of the Broken Triangle:

“The Broken Triangle speaks to us of Mortality—of the uncertainty of our tenure of life—of the importance of an industrious use of our time and our faculties, and of the place of wages, refreshment and rest, which awaits our entrance through the gate of Death.”

And for more information on the unbroken Square and unbroken Triangle let’s consult another more modern source on Cryptic Masonry, the 1923 General Grand Council of Cryptic Masons, International’s ritual for the Super Excellent Masters degree, we find the description of the Square and the Triangle notice a similarity in the descriptions for the Square here and from Dr. Mackey’s version, when considering a reference to the Fellowcrafts degree of both Geometry and Masonry:

“The Square is one of the most significant of the emblems of Masonry.Its four equal sides subtended by four perfect angles, symbolize the four Cardinal Virtues, which are imprinted upon the memory and engraven upon the very soul of every True Mason: Temperance, Fortitude, Prudence and Justice.”

In Masonry every Perfect Ashlar must be true and square in order that the structure may possess strength and beauty, each living stone must be squared by the square of truth and virtue in order that Masonic edifice may continue to hold aloft its hoary head, crowned with majesty and clothed with stately lines, to be in the future as in the past the wonder and admiration of all ages.

The Triangle or Delta is emblematic of Deity, its three equal sides representing His omnipotence, His omniscience and His omnipresence; His universal power, universal knowledge, and universal presence.

It also symbolizes the triumph of Freemasonry of Ignorance, Intolerance, and Bigotry, the three greatest enemies of human liberty and progress. It also teaches the three great virtues: Faith Hope and Charity, reminding us of our triple duties Masons that we owe to God, to our neighbor and ourselves, teaching Faith in God, all-wise, all-powerful, and all-merciful; Hope in the ultimate triumph of truth over every error, and charity, or Love for all mankind, especially our brethren.

Further in Ray V. Denslow’s 1950 work entitled An Encyclopedia of Cryptic Masonry, (which was prepared for the Grand Council of Missouri) we find entries on the Broken Triangle and Square as geometric figures:

“Broken Triangle: The emblem of the Cryptic Rite is the Broken Triangle. This has produced much argument. Just what is a broken triangle? How should a broken triangle be represented? The argument will never be settled to the satisfaction of all. We do know that a triangle is a figure of three sides; its Masonic form would be the equilateral triangle with its equal sides and equal angles. Merely taking off one of the sides would not represent a broken triangle. To our way of thinking one of these sides must be broken by removing a section and not the whole side.

“It alludes to the three Kings who form the Masonic triangle, Solomon and the two Hirams. The death of any one of these would leave the triangle broken. The broken triangle is referred to in the degree of Royal Master. It represents something uncompleted. Could that be the allegory of Life? We think it is.

“Some think the sides of the triangle represent Wisdom, Strength and Beauty. Destroy the triangle by taking a way Wisdom and you have left only Strength and Beauty. There is no character which is only strong and beautiful. Remove Strength and you have wisdom and beauty. What value is there to life without strength to carry on—perfection of the physical body. And what would a life be without Beauty, the Beauty of Character. The triangle whether broken or completed, offers a splendid opportunity for study and thought.

“Square (The Figure): This is a figure of four sides, equal in length and angles it is one of the symbols of the Rite, the explanation from the monitor reading:

“The square is one the most significant of the emblems of Masonry. Its four equal sides subtend by four perfect angles, symbolize the four cardinal virtues, which are imprinted and engraven upon the very soul of every true Mason: Temperance, Fortitude, Prudence and Justice… It also represents the encampment of children of Israel, with three tribes on each side.” [Note the inclusion from the General Grand Council’s Super Excellent Master ritual.]