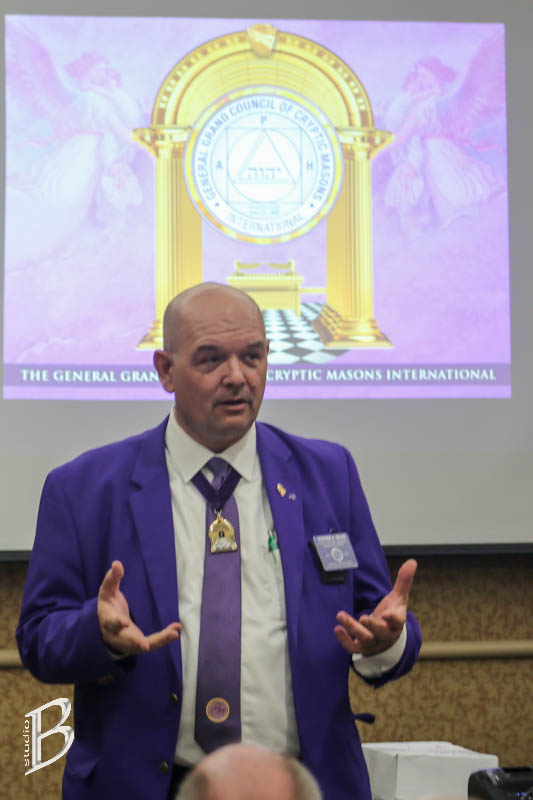 Highlights of the 47th Triennial Virtual Assembly
Held September 26, 2020
(To be distributed to the Elective Officers of member Grand and Subordinate Councils)

Due to Corona Virus restrictions, the Triennial Assembly of the General Grand Council of Cryptic Masons, International was held via Zoom with over 500 Companions attending world-wide. In addition, at least 82 Companions, Brothers, and Friends joined us watching the meeting via the Cryptic Masons International YouTube Channel. 681 people registered, which included 38 duplicate registrations, making the total registered 643. The volume of participants caused a delay in starting.

The following alterations to the normal business were made to facilitate the first online meeting:

The following decisions regarding the meeting were made to facilitate the online business:

The General Grand Council was declared open in ample form by Most Puissant General Grand Master David A. Grindle at 18:40 UTC on Saturday, September 26, 2020. Present were voting delegates from 50 member Grand Councils, six Grand Councils Under Dispensation and over 20 Subordinate Councils spanning 24 countries on 5 continents and 18 time zones (UTC-10 to UTC+8).

Reports of Officers and Committees

The Triennial.org website held all received reports as pages for ease of translation by the Craft, and the Proceedings of the 46th Triennial Assembly was available as a pdf. The General Grand Master gave a condensed version of his Address. Reports were given by the Committees on Necrology, Charters and Dispensations, Jurisprudence, and Credentials. Published and given reports were all accepted. The proposed budget was presented with an explanation by Monty J. Glover, Deputy General Grand Master, and was adopted.

A short memorial service was presented by Right Puissant Companion E. Jeffrey Craig memorializing those officers and members lost during the Triennium.

The following Subordinate Councils are approved for or have received a Charter. If not yet received, will be Constituted during the 48th Triennium.

The following Grand Councils were approved to remain Under Dispensation

The following Grand Councils were approved for Chartering and Constitution during the 48th Triennium.

Election and Appointment of Officers

The appointive officers of the 48th Triennium will include the following.

The Cryptic Masons Medical Research Foundation (CMMRF) Corporate Meeting was held. An update was made by President Monty J. Glover. The Executive Secretary’s report was previously posted as a part of the preliminary reports, so Most Illustrious Companion Gary Wyne went directly to Dr. Michael Murphy’s presentation and update on the activities of CMMRF. After the presentation, Gary Wyne asked that we donate a portion of the money saved by not travelling to CMMRF.

The election of the At Large Board of Trustees positions for CMMRF was declared without objection for the four candidates who ran unopposed for the positions. These members include the following.

The new board members were declared installed. Romania reported that they have implemented a $1.00 per Companion annual donation program.

The following Companions’ continued work as Grand Recorder for their Jurisdiction, for at least ten years, was acknowledged by their being awarded the Mordhurst Award.

The following Companions’ efforts in promoting and preserving Cryptic Masonry were acknowledged by them receiving the Columbian Award.

The following Companion, whose contribution to Cryptic Masonry is known world-wide, who has for over twelve years compiled, produced, printed and distributed the Cryptic Freemason periodical, was awarded the Gold Award, or Medal of Honor.

The initial meeting of the 48th Triennial Assembly is planned to be in person and in coordination with the Grand Encampment Triennial Conclave in August of 2021.

The meeting was closed without form, with peace and harmony prevailing at 22:41 UTC by Most Puissant General Grand Master David A. Grindle.